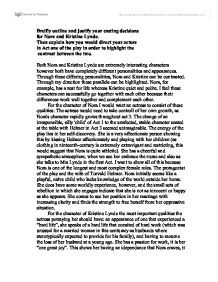 A doll's House, casting decisions for Nora and Kristine Lynde

Breifly outline and justify your casting decisions for Nora and Kristine Lynde. Then explain how you would direct your actors in Act one of the play in order to highlight the contrast between the two. Both Nora and Kristine Lynde are extremely interesting characters however both have completely different personalities and appearances. Through these differing personalities, Nora and Kristine can be contrasted. Through my direction these parallels can be highlighted. Nora, for example, has a zest for life whereas Kristine quiet and polite. I feel these characters can successfully go together with each other because their differences work well together and complement each other. For the character of Nora I would want an actress to consist of these qualities: The actress would need to take controll of her own growth, as Nora's character rapidly grows throughout act 3. ...read more.

She has a cheerful and sympathetic atmosphere; when we see her embrace the nurse and also as she talks to Mrs Lynde in the first Act. I want to show all of this because Nora is one of the longest and most complex female roles. The protagonist of the play and the wife of Torvald Helmer. Nora initially seems like a playful, na�ve child who lacks knowledge of the world outside her home. She does have some worldly experience, however, and the small acts of rebellion in which she engages indicate that she is not as innocent or happy as she appears. She comes to see her position in her marriage with increasing clarity and finds the strength to free herself from her oppressive situation. ...read more.

This shows her having an idependance that Nora craves, it also makes her very unusual. We discover in Act 3 that Kristine has chosen Krogstad as her future partner and she suggests that they "join forces". She is certain that she can see the best in him as a person and help him change his life for the better. It is evident that the actress should play her more confined and less blooming as Nora. Khristine is Nora's childhood friend. Kristine Linde is a practical, down-to-earth woman, and her sensible worldview highlights Nora's somewhat childlike outlook on life. Mrs. Linde's account of her life of poverty underscores the privileged nature of the life that Nora leads. Also, we learn that Mrs. Linde took responsibility for her sick parent, whereas Nora abandoned her father when he was ill. ...read more.

This answer starts off with a pretty wayward introduction that seems to be there for the sake of being there, whilst recycling the same first sentence over and over again. The candidate really should be looking to include some background ...

This answer starts off with a pretty wayward introduction that seems to be there for the sake of being there, whilst recycling the same first sentence over and over again. The candidate really should be looking to include some background information about the play, it's significance to the world of Theatre when it débuted, and how the candidate intends to get the audience to react to their characters. After doing this, the candidate can then begin to consider how they are going to go about eliciting that audience response in the main body of the essay.

The structure otherwise is fairly good, with two distinct paragraphs - one for Nora and one for Mrs. Linde. Although I would argue that a sufficient conclusion is needed. It doesn't need to be greatly informative, but it does need to be there, so to tie up the end of the essay and signal it's completion. As it stands it feels slightly detached at the moment, and the candidate may be marked down on their essay writing ability without one.

The Level of Analysis here is fair, but is far better augmented when concerning Nora than when concerning Mrs. Linde. The candidate makes many an insightful and realistic observation about the requirements of the actress you should play Nora, though oftentimes these suggestion feel like too much of an analysis and not enough of a description of the actress they need. For instance - and this also goes for their description of Mrs. Linde - how old will the actresses be? (this is very important as Mrs. Linde is evidently older, far more learned and more traditionalist than Nora) What about their hair colour? What will their costumes be like? How should they walk? How tall are they both? (Mrs. Linde, being old, might be shorter than Nora; walk slowly; be hunched over even from all her years labouring; she may have a weather-beaten face and whittled grey hair, for example. She would be in her late fifties/early sixties). Alongside the relatively poor description is a good understanding of the times in which the play was written (discussing the restrictive issues of Victorian clothing), and so the candidate succeeds here in appreciating context.

The Quality of Writing can be dubious here. Though no explicit errors with regard punctuation or use of grammar are made, the candidate appears unsure of the correct spelling for Mrs. Linde, or Kristine. Many times they spell the name differently - "Khristine", "Kristine", "Mrs. Lynde", "Mrs. Lynd" and "Mrs. Linde". This looks highly unprofessional and very careless actually, the candidate cannot afford to continuously spell a character's name wrong when they have studied the text they are writing about for months. Be sure to address your character appropriately and accurately. In this case the correct spelling is "Mrs. Linde".