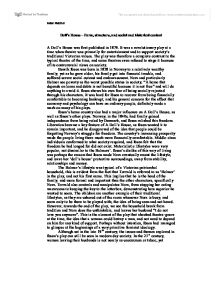 A Doll's House - Form, structure, and social and historical context

Doll's House - Form, structure, and social and historical context A Doll's House was first published in 1879. It was a revolutionary play at a time when theatre was primarily for entertainment and to support society's traditional Victorian values. The play was therefore a complete contrast to the typical theatre of the time, and some theatres even refused to stage it because of its controversial views on society. Henrik Ibsen was born in 1828 in Norway to a relatively wealthy family, yet as he grew older, his family got into financial trouble, and suffered severe social outcast and embarrassment. Nora and particularly Helmer see poverty as the worst possible status in society, "A home that depends on loans and debts is not beautiful because it is not free" and will do anything to avoid it. Ibsen shows his own fear of being socially rejected through his characters. It was hard for Ibsen to recover from being financially comfortable to becoming bankrupt, and his general concern for the effect that economy and psychology can have on ordinary people, definitely made a mark on many of his plays. Ibsen's home country also had a major influence on A Doll's House, as well as Ibsen's other plays. Norway, in the 1840s, had finally gained independence from being ruled by Denmark, and Ibsen relished this freedom. ...read more.

Suzannah was independent and strong-willed, a possible reason for Ibsen creating a female heroine in Nora. Ibsen believed that the husband and wife in a marriage should be equal, and this belief is clearly shown in A Doll's House. Ibsen used the French 'pi�ce bien faite' meaning 'well made play' as the basic form for A Doll's House. This usually involved using typical characters such as the jealous husband, the villain, the reliable friend and the distressed, fragile woman. The structure consisted of a build up of tension to a climatic scene where all the characters' problems were resolved. Ibsen took this form and gave it layers. The characters became more complex, and so did the plot. The innocent woman evolved into a manipulative, strong and passionate protagonist, and the typical villain had a conscience. The storyline also became far less predictable and standard for traditional play of the time. Mistaken identities were replaced with deception, and morals were replaced with controversy. A Doll's House is divided into three acts. Ibsen chose this format to give the impression of a beginning, a middle and an end. The first act is used as an introduction, and a foundation for the characters personalities. By doing this, we can see the development of the characters' personalities and behaviour throughout the play. It also physically sets the scene, and we see the 'warm, well-furnished room' in which Nora spends almost all of her time. ...read more.

Other elements related to this style include the vivid imagery Ibsen uses, and his use of monologues as a dramatic device is clearly non-naturalistic. Much of A Doll's House is symbolic; another style Ibsen's play could fall into. He uses symbols and metaphors throughout the play, such as the 'new savings bank' to signify the Helmer's new start, and even the title 'A Doll's House' clearly represents how troubled Nora feels with the confines of her doll-like existence. This symbol has the effect on creating more sympathy for Nora's character, as it reinforces the idea that she is trapped in a materialistic world, and is being constantly controlled. Ibsen's play has also been seen as a modern tragedy. The definition of tragedy originated with Aristotle, a philosopher who theorised that tragedy results in catharsis is, and is what made Greek tragedies so appealing. Catharsis refers to the "cleansing of emotions", and when in drama, explains why audiences took some kind of satisfaction in seeing these types of plays. Mostly however, the play is naturalistic, which is what made it so unique when it was written. The characters in A Doll's House are not just catergorised as 'bad' or 'good' as they would be in melodramas. Krogstad for example, has both cruel and forgiving elements to his personality. This complexity of character is very naturalistic, and gave audiences something to relate to. The detail of the rooms and even something as simple as the chronological order of the scenes also adds to its naturalism. Helen Fletcher ...read more.