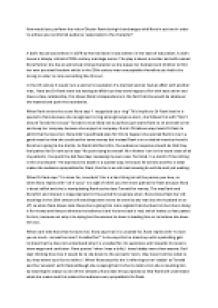 A Doll's house. How would you perform the role of Doctor Rank during his exchanges with Nora in act two in order to achieve your preferred audience resopnse(s) to the character?

﻿How would you perform the role of Doctor Rank during his exchanges with Nora in act two in order to achieve your preferred audience resopnse(s) to the character? A doll's house was written in 1879 by Henrick Ibsen it was written in the style of naturalism, A doll's house is sharply critical of 19th century marriage norms. The play is about a mother and wife named Nora Helmer she has an extremely strong character as she leaves her husband and children to find her own personal freedom which in the 19th century was unacceptable therefore you had to be strong in order to carry something like this out. In the 19 century it would ruin a women's reputation if a married women had an affair with another man, Nora and Dr Rank were not having an affair but they were happy to flirt with each other and have a close relationship, this shows Nora's independence in the fact that she would do whatever she wanted and push the boundaries. ...read more.

The way Rank and Nora flirt and interact is inappropriate for the period for example when Nora shows Rank her silk stockings in the 19th century silk stockings were not to be seen by any man but the husband on or off, so when Nora shows rank these she is giving him more signals that she likes him but she is doing it for money and favours whereas he believes it and his love back is real, which makes us feel pathos for him, because not only is he dying but the women he loves is leading him on to believe she loves him too. When rank tells Nora that he loves her, Nora says that it is uncalled for, Rank replies with "to love you as much...as another man? Uncalled for?" As he says this he stands up with a patrolling gait to show that he does not understand why it is uncalled for, his eyebrows arch towards his nose to show anger and confusion. ...read more.

When rank tells Nora that he loves her she makes it out that he has done a terrible thing "how could you be so clumsy?" "that was uncalled for" in that period it was a bad thing to do but it certainly wasn't as bad as Nora makes it out to be. In this scene Dr Ranks purpose is to highlight his illness to the audience. Therefore I would act his role to gain sympathy from the audience for his illness by walking with a hunched back to portray his spinal injury and constantly checking my pocket watch to show that time is running out. Also on the line , "it is horrid. One more examination as soon as that's done ill know the exact month when the decline begins." I'll say this with a strong voice to portray my braveness, but I will hunch my back over to show that my body is giving up on me. ...read more.