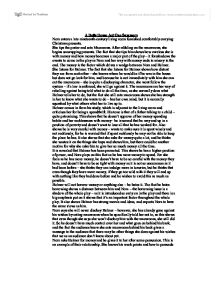 A dolls house act one summary

A Dolls House Act One Summery Nora enters a late nineteenth-century living room furnished comfortably carrying Christmas presents. She tips the porter and eats Macaroons. After nibbling on the macaroons, she begins unwrapping presents. The fact that she tips him shows how careless she is with money and how money becomes a major part of the play - it foreshadows the events to come in the play as Nora and her way with money ends in misery in the end. The money is the factor which drives a wedge between Nora and Helmer. She listens for Helmer. The fact that she listens for Helmer shows how distant they are from each other - she knows where he would be if he was in the house but does not go look for him, and because he is not immediately with him she can eat the macaroons - she is quite a disobeying character, she wont follow the system - if a law is enforced, she will go against it. The macaroons are her way of rebelling against being told what to do all the time, as she normally does what Helmer tells her to do, but the fact she still eats macaroons shows she has strength in her to know what she wants to do - has her own mind, but it is normally squashed by what others what her to live up to. ...read more.

Shows Nora can confide in Mrs. Linde - as Mrs. Linde has told Nora all the horrors that occurred in her life, she feels she can trust her with what has happened to her. This expands on the fact that Helmer dislikes borrowing money of any kind for any reason at all, and she has deliberately gone against his wishes like she did with the macaroons. Shows that she doesn't let herself get controlled by anyone else and does what she feels is right to do, no matter what others may think of her. Dr Rank enters and talks to Mrs Linde and Nora. He says that Krogstad is here, and is talking to Helmer which causes Nora to worry - she had just been telling Mrs. Linde about borrowing money and the person she had borrowed from (the audience don't know yet) is talking to her husband and this causes Nora to worry incase Krogstad reveals to Helmer what she has done. Dr Rank reveals that he is ill - this shows a quite a bleak image on the house, foreshadows a sort of despair over the house, as if there is trouble on the horizon and the events to come are quite dark and gloomy. Dr Rank talks about more cripples and says that Krogstad is one - over work isn't a good thing in his opinion - it makes a person ill as in the cases of Krogstad and Mrs. ...read more.

Nora asks for him to let Krogstad keep his job - hoping that he says yes for she doesn't want her husbands name blackened, she fears for his decision, for he doesn't know he is jeopardising his job and status for what he may say. This also shows a gap in their relationship - the fact she asks him for Krogstad to keep his job but doesn't tell him why, shows that Helmer thinks he knows Nora when there is a lot of things she hides from him. Helmer reveals his reasons for disliking Krogstad. Krogstad poisoned children with his crime. This makes Nora feel more nervous about Helmer finding out what she has done, as he will think the same about her as he does for Krogstad which makes it harder for her to tell him what she's done as he will look down on her for her crime. Helmer calls Krogstad by his first name to show that he is of higher ranking and more importance than Krogstad. Nora tells nurse to keep children away and ponders the effect her crime will have on her family - she has the whole thing about how Helmer will look down on her for what's she's done, and how she may end up like Krogstad and looked down on in society and unable to get anywhere with her life. ...read more.