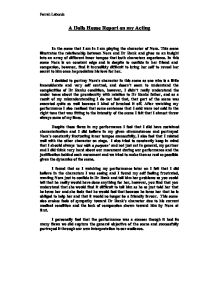 A Dolls House Report on my Acting In the scene that I am in I am playing the character of Nora. This scene illustrates the relationship between Nora and Dr Rank and gives us an insight into an array of different inner tempos that both characters experience. In this scene Nora is on constant edge and is despite to confide in her friend and companion, however, find it incredibly difficult to bring her self to reveal her secret to him once he proclaims his love for her. I decided to portray Nora's character in this scene as one who is a little inconsiderate and very self centred, and doesn't seem to understand ...read more.

Despite these flaws in my performance I feel that I did have sustained characterisation and I did believe in my given circumstances and portrayed Nora's constantly fluctuating inner tempos successfully, I also feel that I related well with the other character on stage. I also tried to constantly keep in mind that I should always 'act with a purpose' and not just act in general, my partner and I did think very hard about our movement during our performance and the justification behind each movement and we tried to make then as real as possible given the dynamics of the scene. ...read more.

she would find it difficult to tell him as he as just told her that he loves her and she feels that he would feel that because he loves her that he is obliged to help her and that it would no longer be a friendly favour. This scene also evokes feels of sympathy toward Dr Rank's character due to his current medical condition and the lack of compassion shown toward him by Nora at first. I personally feel that the performance was a success though it had its many flaws we did capture the general objective of the scene and successfully portrayed it through our own interpretation to our audience. Farrah Laborde ...read more.

This is an excellent review of the candidate's own work. There is evidence of an appreciation that there is always room for improvement, full of intelligent suggestions to do so, and a critical evaluation of what they found good about ...

This is an excellent review of the candidate's own work. There is evidence of an appreciation that there is always room for improvement, full of intelligent suggestions to do so, and a critical evaluation of what they found good about their performance, which is nicely realised in the naturalistic style Constantin Stanislavski pioneered and no doubt influenced in this scene. The candidate also considers interaction as well as their own action, and this earns marks here and in their understanding of internal thoughts and emotions because these are very important aspects of Stanslavskian theatre. Where the candidate could improve however, is being more explicit with their comments on movement and gesture. In Stanslavskian theatre, all movements and all gestures have incentives and reasons, as in real life, so these must be shown to be under control and given all the attention that the candidate devotes to the creation of the character's voice and inner self.

The Level of Analysis is good. There is a fair balance between what the candidate did well and not so well, showing they can be self-critical without being overtly pessimistic, yet they do not stray to close to over-confidence either. There is, as before, room for improvement in the comments about gesture and movement and perhaps stance, as that would reveal a lot about Nora's intentions in this scene (how does she stand? What message does it send to Dr. Rank? What message does it send to the audience?). Filling in these minor inconsistencies would see the candidate awarded a five-star review and a strong A grade for this section of their written work. If the other two sections (presumably these are part of the three Supporting Notes sections for interpretation of character and play at AS Level), where of the same calibre as this, then I see no hurdles in achieving a high grade for the written task.

The Quality of Written Communication is good - the candidate references a number of specific dramatic terminology and applies them correctly, evaluating critically a number of very detailed acting elements of their performance. From an English perspective the candidate also succeeds, as there are no causes for concern with regard to spelling, punctuation or grammar. My best guess is this candidate has taken the time to check their work for errors that even spell-checkers on computers can often miss, so I applaud them for taking this precaution and encourage other candidates to do similarly rigorous checks to their written work before submission.