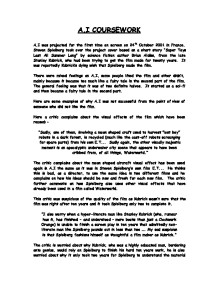 A.I COURSEWORK A.I was projected for the first time on screen on 24th October 2001 in France. Steven Spielberg took over the project cover based on a short story "Super Toys Last All Summer Long" by science fiction author Brian Aldiss, from the late Stanley Kubrick, who had been trying to get the film made for twenty years. It was reportedly Kubrick's dying wish that Spielberg made the film. There were mixed feelings on A.I, some people liked the film and other didn't, mainly because it became too much like a fairy tale in the second part of the film. The general feeling was that it was of two definite halves. It started as a sci-fi and then became a fairy tale in the second part. Here are some examples of why A.I was not successful from the point of view of someone who did not like the film. Here a critic complains about the visual effects of the film which have been reused:- "Sadly, one of them, involving a moon shaped craft used to harvest "lost boy" robots in a dark forest, is recycled (much like the cast-off robots scrounging for spare parts) from his own E.T... Sadly again, the other visually majestic moment is an apocalyptic underwater city scene that appears to have been cribbed from, of all things, Waterworld." The critic complains about the moon shaped aircraft visual effect has been used again in A.I the same as it was in Steven Spielberg's own film E.T... He thinks this is bad, as a director, to use the same idea in two different films and he complains on how his ideas should be new and fresh for each new film. ...read more.

humanity, their freedom just because of their religion, but instead of showing what happened in the holocaust war was actually about (where thousands of Jewish people where killed and tortured in concentration camps), he focuses on 600 people who survived to give it that happy ending, but in fact the holocaust was really a very sad event. When robots start to feel emotions they become more than just a toy or a service, they became a true individual, in some people's eyes, who should be treated and respected the way another human would be to you, if they respected and treated you in the same manner. In the real world, of course not everyone would see it that way. Being like humans most robots would hopefully turn the other cheek instead of being irrational as most humans do but you could not judge robots by right or wrong unless such rules are applied to yourself. First of all when you see David you do not have any cares for him and he just looks like boy at a glance but you can tell by the way he talks and walks. He has totally perfect posture and speech without any emotion it, he is completely logical in what he does. When David is able to love and feel emotions he starts to act like a real child and does not walk like a robot and becomes illogical because his human side to feel emotion makes him believe that the Blue Fairy from Pinocchio was real and he thinks that if he does find the Blue Fairy his mother will love him. This shows that David is just like a human as he believes in the supernatural things which cannot possibly happen just as humans do. ...read more.

David is, in fact, real enough for us as an audience as he has all of the characteristics of a real boy and does nothing to make us believe that he is a robot. The film descends into sentimentality because of the events that are happening, like David finding out that he is not special or unique. You find yourself empathising for the little robot child when David begs the fairy to make him into a real boy for 2000 years. The sad music reflects the sentimentality. I did not expect the ending the praise the best side of what humans can be. It was a great surprise because anyone who can think and feel emotions for themselves would hate the humans for such prejudice against them, such as the treatment meted out in the Flesh Fair. At the end David achieves unique status in two ways. They are:- He being the only robot looking like a human and actually had experienced living with them, and He is the only robot of his kind again. A.I has a happy ending because like humans David had held on to his dream (that his mother would love him like a normal son) and in the end it seems she did, but in real life, people do not always achieve their dreams. In my opinion does do justice to the original ideas up to a point, but loses some of its scientific debate by the fairy story aspect. We don't really know how a robot would react with human emotions and what it would make of, or its reaction to, having human emotions. At the moment it is just science fiction but it could become a reality in the future; a flat fact! ...read more.