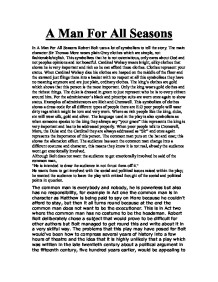 A Man For All Seasons

A Man For All Seasons In A Man For All Seasons Robert Bolt uses a lot of symbolism to tell the story. The main character Sir Thomas More wears plain Grey clothes which are simple, not fashionable/stylish. This symbolizes that he is not ostentatious, only cares about God and not peoples opinions and not boastful. Cardinal Wolsey wears bright, silky clothes that shows he is very important and rich so he can afford these clothes. Clothes represent your status. When Cardinal Wolsey dies his clothes are heaped on the middle of the floor and the steward just flings them into a basket with no respect at all this symbolizes they have no meaning anymore and are just plain, ordinary clothes. The king's clothes are gold which shows that this person is the most important. Only the king wears gold clothes and the richest things. The duke is dressed in green to just represent who he is to every citizen around him. For the administrator's black and pinstripe suits are worn once again to show status. Examples of administrators are Rich and Cromwell. This symbolism of clothes shows a dress code for all different types of people there are E.G poor people will wear dirty rags which might be torn and very worn. Where as rich people like the king, duke, etc will wear silk, gold and silver. The language used in the play is also symbolism as when someone speaks to the king they always say "your grace" this represents the king is very important and has to be addressed properly. When poor people talk to Cromwell, More, the Duke and the Cardinal they are always addressed as "Sir" and once again represents the importance of this person. The common man puts on the hat and coat; this shows the alienation effect. The audience has seen the common man change into a different costume and character, this means they know it is not real, already the audience wont get emotionally involved. ...read more.

Bolt manages to start and end the play quite skilfully with the same character, the Common Man, I think that if anyone else were to write a play about the same subject they would find it hard to get the audiences attention without confusing them but Bolt presents it to the audience in a simple and dramatic way by using the common man to act as a link between the actors and the audience. He keeps the audiences interest all the way through by using little bits of subtext here and there. Robert Bolt uses the characters in such a way that everyone thinks they know what is going to happen to that character later in the play but instead of it actually happening the opposite or something different happens. Bolt creates psychologically realistic characters because they act as we know human beings react and he makes characters more interesting by contrasting them with each other, for example Chapuys and Cromwell, both of them are trying to get the same information about Sir Thomas More. There are also characters, which are fickle and can change their minds very easily about their beliefs and these contrasts with More who is very steadfast and stands for what he believes in. There is a huge contrast between Rich and More. Sir Thomas More is not ambitious but Rich is desperate for anything. Rich tries to flatter Norfolk for a job and Norfolk asks Sir Thomas More whether he recommends him but More just pints him out. This shows us that Sir Thomas More is very literal in his meaning of words. More always takes the meaning of words to their extremities and is a very highly educated man. More has humour and sarcasm with self-clarity and a generosity of spirit. More wants his children to be like him so he has given Meg the best possible education so that she has the best possible talent. ...read more.

In More�s last words he said to Margaret " in matters of conscience the loyal subject is more likely to be loyal to his conscience than to any other thing". In my opinion More is a saint because he never let go of his beliefs in the law and his faith. Bolt wrote A Man for All Seasons probably without realising its relevance to modern day teenagers since teenager's need a real example of moral responsibility. We do need our heroes, saints, exemplars who live out a theory on principle. Teenagers respect risky behaviour and he tried to play it out safely. Alas Silence was not his protection. More was eminently courageous "He drags the basket into the light and again indicates there is no costume in it. Cromwell takes a small black mask from his sleeve and offers it to him." This again shows the alienation effect, the common man obviously wasn't expecting to be the headsman as he had no costume, it is as if Cromwell is letting him know that he is not doing a bad thing. Cromwell knows that he did no wrong and so shall go to heaven. The common man now has an identity as the headsman. When Cromwell takes the mask from his sleeve the whole audience can see him doing it and so again it breaks the realism even at an intense moment. This break in reality might get the audience to think about the morality of what is happening to More and whether they think that he should die or not, this is exactly what Bolt wanted, the audience to be thinking about the theory. In Act two we are told the exact stage settings, "Bars, rack and cage flown swiftly upwards" This happens all in front of the audience so the idea showing the audience that it is not real is done here, they can see the change of scenery so it now is impossible to believe that what they see is real. ...read more.