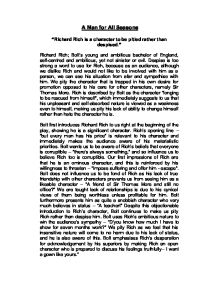 A Man for All Seasons - &quot;Richard Rich is a character to be pitied rather than despised.&quot;

A Man for All Seasons "Richard Rich is a character to be pitied rather than despised." Richard Rich; Bolt's young and ambitious bachelor of England, self-centred and ambitious, yet not sinister or evil. Despise is too strong a word to use for Rich, because as an audience, although we dislike Rich and would not like to be involved with him as a person, we can see his situation from afar and sympathise with him. We pity the character that is trapped in his own desire for promotion opposed to his care for other characters, namely Sir Thomas More. Rich is described by Bolt as the character "longing to be rescued from himself", which immediately suggests to us that his unpleasant and self-absorbed nature is viewed as a weakness even to himself, making us pity his lack of ability to change himself rather than hate the character he is. Bolt first introduces Richard Rich to us right at the beginning of the play, showing he is a significant character. Rich's opening line - "but every man has his price" is relevant to his character and immediately makes the audience aware of his materialistic priorities. Bolt wants us to be aware of Rich's beliefs that everyone is corruptible - "there's always something," and so influence us to believe Rich too is corruptible. ...read more.

We also feel sorry for Rich after seeing his bribery skills; or lack of. His attempt to bribe the steward for information is dismal to the audience as they can see that he begins by giving the money before being told anything, and receiving little information in return - "(gives coin) What did you tell him?" Despite Rich's inconsistent opinions, he still comes across as an upfront character - "I sense that I am not welcome here." His feeble attempts to sell himself are embarrassing for him, which makes us empathize more - "I would never repeat or report a thing like that." His honesty during his conversation with Cromwell is admirable, and also shows that he is not a treacherous character, nevertheless he still possesses disagreeable qualities - "it would depend what I was offered", but nothing that would make us despise him. Bolt also presents Rich as a naive character which prevents us from hating him - "who's convenience?" Also his surprise at having "lost his innocence" would make us believe he is young and immature, so he is not old enough to be taken seriously enough to be despised. Furthermore, Rich continues to defend More, which shows he does have a conscience on certain issues - "Don't forget he's an innocent, Master Cromwell." ...read more.

and does not care for Rich at all. Bolt shows that Rich is despondent working for Cromwell, but his ambitious nature takes over - "(unhappily)," which makes us pity his position. It is only the end of Act I that Rich realises how little Cromwell cares for him and how he is being used - "then he never put he hand in a candle... did he?" Bolt uses stage direction to influence the audience's impression of many characters, especially Rich - "(contemptuous)". His use of stage direction allows him to express the characters emotions to each other and what they are thinking - "(regarding Cromwell with horror)", "(But he seems gloomy)". This helps us to pity Rich as we can see that his giving out of information is done hastily and that he is not happy betraying More. This restores our faith that he is trapped by his own selfishness for ambition rather than downright wickedness. Bolt describes Rich as "an academic hounded by self-doubt," which sums up why we dislike Rich, yet choose to pity him rather than despise him. He is portrayed as pushy and worldly, yet his conscience and desperation allow us to view him as harmless, so we feel sorry for him instead. He comes across as a young man trying to get noticed in the ruthless world, yet he doesn't seem cut out for hard-hearted work as his moral values prevent him from being as callous as he likes to depict. ...read more.