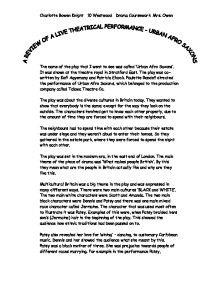 A Review of a Live Theatrical Performance - Urban Afro Saxons.

The name of the play that I went to see was called 'Urban Afro Saxons'. It was shown at the theatre royal in Stratford East. The play was co-written by Kofi Agyemany and Patricia Elcock. Paulette Randell directed the performance of Urban Afro Saxons, which belonged to the production company called Talawa Theatre Co. The play was about the diverse cultures in Britain today. They wanted to show that everybody is the same; except for the way they look on the outside. The characters involved get to know each other properly, due to the amount of time they are forced to spend with their neighbours. The neighbours had to spend time with each other because their estate was under siege and they weren't aloud to enter their homes. So they gathered in the estate park, where they were forced to spend the night with each other. The play was set in the modern era, in the east end of London. The main theme of the piece of drama was 'What makes people British'. By this they mean what are the people in Britain actually like and why are they like this. Multicultural Britain was a big theme in the play and was expressed in many different ways. ...read more.

The second love story was between Patsy and Dennis. This relationship was much more suttle and undeveloped. The two of them didn't really know each other at the beginning of the play and only started to emerge, when Dennis tried to flirt with Patsy. Patsy tired to deny any feeling for Dennis at the start, but by the end of the performance she would respond to his flirtatious ways. The second was about a 17-year-old student named Jermaine, who was planning to go to university in Manchester. Patsy who was Jermaine's mother didn't know about his plans and when she found out wasn't happy. I think the writers were trying to tell the audience that Britain is no-longer just white people; it has various nationalities in it and this is what makes us what we are. As in the play Scott the white male has a liking for rice and peas. This is because of his wife's influences and cultural background has rubbed off on him. Overall I think the writer is invoking equality but at points shows this is not always the way. The writers were extremely successful in my eyes because they wanted to explore what makes people British, t hey wanted to create a piece of drama that discovered all types of British People. ...read more.

I also liked it because Scott made me laugh, for instance when he did impressions of Amanda's family in St.Lucia, when they went there for their honeymoon. However I felt Jermaine's performance could have been stronger. This is because his facial expressions weren't powerful enough. On one occasion in the play, worried was what he meant to look like, as he had not told his mother of his plans but seemed to look rather blank and no emotions showing. However his body language was exceptionally realistic to a teenage boy (the role he was meant tot be playing), especially when he would drop his head in a strop, when his mum (Patsy) would tell him off. In conclusion I think the playwrights got their points across extremely well and that different cultures can adapt to living in different countries and become part of that culture. I was most amused by the disagreements between Amanda and Patsy as their similar personalities caused them to argue. The only improvement for this play would have been to broaden the amount of cultures include as I expressed earlier. Finally I think the audience would have left the theatre really understanding the diversity in Britain today! Charlotte Bowen Knight 10 Westwood Drama Coursework Mrs. Owen ...read more.