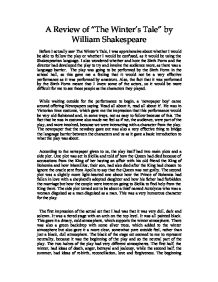 A Review of The Winters Tale by William Shakespeare

A Review of "The Winter's Tale" by William Shakespeare Before I actually saw The Winter's Tale, I was apprehensive about whether I would be able to follow the play or whether I would be confused, as it would be using the Shakespearian language. I also wondered whether and how the Sixth Form and the director had developed the play to try and involve the audience more, as there was a language barrier. The play was going to be performed by the Sixth Form in the school hall, so this gave me a feeling that it would not be a very effective performance as it was performed by amateurs. Also, the fact that it was performed by the Sixth Form meant that I knew some of the actors, so it would be more difficult for me to see those people as the characters they played. While waiting outside for the performance to begin, a 'newspaper boy' came around offering Newspapers saying 'Read all about it, read all about it'. He was in Victorian time costume, which gave me the impression that this performance would be very old-fashioned and, in some ways, not as easy to follow because of this. The fact that he was in costume also made me feel as if we, the audience, were part of the play, and more involved, because we were interacting with a character from the play. ...read more.

I found this very appropriate as Time is not really a person, but an abstract representation of how we see things that happen. Time was used as a narrator and a storyteller in this performance and so involved us (the audience) more. In Shakespeare's version, Time only appears in Act IV. It is as if this whole play is seen through the memories of Time. She commented throughout the play on the different situations that the characters get themselves into. I found this very effective because I, as part of the audience, felt more connected and found it easier to understand what was going on. They used many means to involve the audience more but I felt that the staging of the play created a kind of wall between the characters and the audience because it was an end on performance, but also because both the set and the audience were raked. This set up the feeling that we were watching a spectacle. This feeling of a wall between the audience and the characters was broken down any time there was a monologue or a soliloquy by one of the characters, such as in the court scene, or when Autolycus was letting the audience in on one of his plans to rob someone. During the court scene, Hermione and Leontes both addressed the audience, so that it was as if we were part of the court, we were the jury, so we felt more involved; we could judge whether we found Hermione guilty or not. ...read more.

seems to be sadder, more solemn. Everybody stands on their own level, so it is like everybody is separate and mournful, like they were at a funeral. The way they used the last scene to begin the performance with, was very effective because it made me feel like I really wanted to find out why things ended up that way. I found the design of the set of the play also very effective. I liked the use of the cyclorama; different colours were used at different times to represent the atmosphere of that moment, such as when Leontes suspected Hermione of betraying him, to represent the anger and jealousy that ensued. At this point the lights turned red but in some way also created shadows to represent how Leontes' judgement was clouded by his anger. Sometimes, the curtains were drawn across the cyclorama, such as in the scene where the baby is brought to Leontes. This created the sense of secrecy. The use of different colours in costume to represent the different countries was effective as well. Purple was used for Bohemia and red for Sicilia. Consequently I found it easier to keep track of the characters and where they were from. Contrary to what I had expected, I actually did find the performance very effective and most of the actors put on very convincing personalities of the characters. The Sixth Form and the Director found many ways to involve the audience more and bridge the gap, such as the newspaper boy, the narrator Time, and music. Also, the mix of comedy, tragedy and romance made the play an interesting, rich production. ...read more.