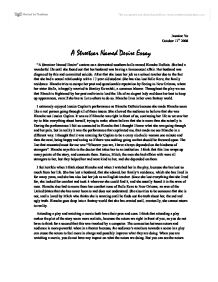 Jasmine Yu October 13th 2008 A Streetcar Named Desire Essay "A Streetcar Named Desire" centers on a devastated southern-belle named Blanche DuBois. She had a wonderful life until she found out that her husband was having a h********l affair. Her husband was disgraced by this and committed suicide. After that she loses her job as a school teacher due to the fact that she had a s****l relationship with a 17-year old student. She has also lost Belle Reve, the family residence. Blanche tries to escape her past and questionable reputation by fleeing to New Orleans, where her sister Stella, is happily married to Stanley Kowalski, a common laborer. Throughout the play we see that Blanch is frightened by her past and tries to lead the life of an elegant lady and does her best to keep up appearances, even if she has to lie to others to do so. Blanche lives in her own fantasy world. I extremely enjoyed Jessica Coplan's performance as Blanche DuBois because she made Blanche seem like a real person going through all of these issues. ...read more.

Eunice, Mitch, the men she had affairs with were all strangers to her, but they helped her and were kind to her, and she depended on them. I feel terrible when I think about Blanche and when I watched her in the play, because she has lost so much from her life. She has lost a husband, that she adored, her family's residence, which she has lived in for many years, and she has also lost her job as an English teacher. Since she lost everything that she lived for, she looked for comfort and took it wherever she could find it, and she usually found it in the arms of men. Blanche also had to move from her comfort zone of Belle Reve to New Orleans, an area of the United States that she has never been to and does not understand. She also tries to be someone that she is not, and is loved by Mitch who thinks she is amazing until he finds out the truth about her, the sad and ugly truth. ...read more.

The audience laughed when something was amusing and watched politely when there was something dramatic occurring. Everyone turned their cell phones off and watched intently to see how the story will unravel. "A Streetcar Named Desire" was all in all very good play that was made even better by the cast and crew. I believe that not all productions of a famous piece of drama can be as good as the audience predicts it to be, because every play is different. Even if the script is the same the actors portraying the characters and the director directing the actors play a big role in whether or not the play is acceptable. Therefore, I think that it was probably a very difficult task for the actors and directors to make such an amazing play because, people who have watched "A Streetcar Named Desire" before will obviously compare the two and conclude which one is better, so there might have been a large amount of pressure to do a good job. I would give the play "A Streetcar Named Desire" 5 stars, because I thought it was an amazing play and was much more than I had expected. ?? ?? ?? ?? ...read more.