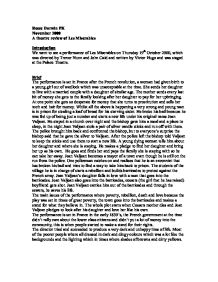 A theatre review of Les Miserables.

Reece Darwin PK November 2000 A theatre review of Les Miserables Introduction We went to see a performance of Les Miserables on Thursday 19th October 2000, which was directed by Trevor Nunn and John Caid and written by Victor Hugo and was staged at the Palace Theatre. Brief The performance is set in France after the French revolution, a woman had given birth to a young girl out of wedlock which was unacceptable at the time. She sends her daughter to live with a married couple with a daughter of similar age. The mother sends every last bit of money she gets to the family looking after her daughter to pay for her upbringing. At one point she gets so desperate for money that she turns to prostitution and sells her teeth and hair for money. Whilst all the above is happening a very strong and young man is in prison for stealing a loaf of bread for his starving sister. He broke his bail because he was fed up of being just a number and starts a new life under his original name Jean Valjean. He stayed in a church over night and the bishop gave him a meal and a place to sleep, in the night Jean Valjean stole a pair of silver candle sticks and run off with them. The police brought him back and confronted the bishop, but to everyone's surprise the bishop said that he gave the silver to Valjean. ...read more.

Jean Valjean was imprisoned for stealing a loaf of bread for his poor and dying sister, he was sent to work in the chain gangs he was no longer a person but just a number which was 24601. He broke his bail when he was released from the chain gangs and started a new life. He is physically an exceptionally strong man and a lot of people comment on it. He speaks very firmly to adult men especially Javert and stands upright to show his strength and authority, but when he speaks to women and children he speaks very softly and seems to lean over as if they are equal in authority, he seems to be a true gentleman. Jean Valjean seemed to be a very proud man we can tell this by his body language because he stands upright at all times other than when he speaks to children. I liked the character Jean Valjean which in my opinion meant that it was a successful character. Javert Peter Corry played Javert. He was the good guy but the way he portrayed the character made us hate him. He is a police officer and was in charge of the chain gang that Jean Valjean was in. he remembered him because he was so strong. Javert comes across as a very straight man that will always speak his mind and if he didn't like you then he would make it quite clear. ...read more.

I think that the rest of my piers shared the same views of the performance as I. I thought that the most interesting part of the performance was when Jean Valjean ripped up the piece of paper and decided to become a person rather than a number. I thought that the highlight of the performance was the scene with the run away cart. Jean Valjean did the impossible and lifted an extremely heavy cart to save someone's life when people where saying and thinking that he would never be able to do it even if he did have three men to help, but he did it on his own. This got him great respect but Javert was watching and realised that only one man could do such a thing as that and that was prisoner 24601 aka Jean Valjean. I wouldn't change anything about the performance by choice but if I had to I would stage it in a larger theatre so that more people could see this great piece of theatre! The most visual moments I retain is the opening scene where Jean Valjean is first seen working in a chain gang. I felt a mix of emotions because I was sad that Valjean had died but pleased to have witnessed such a good performance. I would remember this production because of the acting and musicals as well as the characters Jean Valjean and Javert because I felt that I could relate to them. Overall I thoroughly enjoyed every bit of Les Miserables and would definitely recommend it to anyone that appreciates good theatre! ...read more.