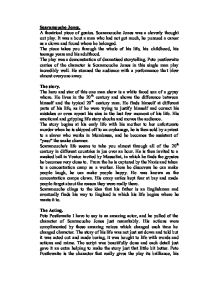 A theatrical piece of genius. Scaramouche Jones was a cleverly thought out play. It was a bout a man who had not got much, he pursued a career as a clown and found where he belonged.

Scaramouche Jones. A theatrical piece of genius. Scaramouche Jones was a cleverly thought out play. It was a bout a man who had not got much, he pursued a career as a clown and found where he belonged. The piece takes you through the whole of his life, his childhood, his teenage years and his adulthood. The play was a demonstration of dramatised storytelling. Pete postlewaite carries of the character is Scaramouche Jones in this single man play incredibly well. He stunned the audience with a performance that blew almost everyone away. The story. The hero and star of this one man show is a white faced son of a gypsy w***e. He lives in the 20th century and shows the difference between himself and the typical 20th century man. He finds himself at different parts of his life, as if he were trying to justify himself and correct his mistakes or even repent his sins in the last few moment of his life. ...read more.

Scaramouche clings to the idea that his father is an Englishman and eventually finds his way to England in which his life begins where he wants it to. The Acting. Pete Postlewaite I have to say is an amazing actor, and he pulled of the character of Scarmouche Jones just remarkably. His actions were complimented by these amazing voices which changed each time he changed character. The story of his life was not just sat down and told but it was acted out and made boring, it was bought to life with words and actions and mime. The script was beautifully done and each detail just gave it an extra helping to make the story just that little bit better. Pete Postlewaite is the character that really gives the play its brilliance, his acting is outstanding. Whether its him rolling around on the floor acting out scenes of his mother receiving one of her many clients, or whether its him speaking to us in the many accents of ...read more.

"Fifty years to make the clown, fifty years to play the clown..." A single candle flame which flickers throughout the piece is finally blown out at the very end. This I believe represents the end of Scaramouche Jones. My view. The play to me was no other than brilliant, and there is no ways of saying well done Pete you were absolutely amazing! The piece to me was such a success because it was so totally original but at the same time was a true classic. The thunderous applause at the end really showed that everyone really did enjoy this, and you will probably find that they were swept away by this piece and emotionally moved. To sum it all up I have to say the piece was sensational, I don't think I could show enough appresiation, but I was truly moved by it ad I don't think I will ever see such a unique piece again. "A sensational evening..." "Totally mindblowingly brilliant!" "Tragic, comical, wonderful" "Last night was an evening I shall not forget for a long time" "...a roller-coaster ride of emotion." ...read more.