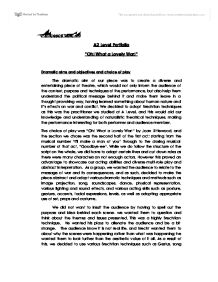 Francesca Balchin A2 Level Portfolio "Oh! What a Lovely War!" Dramatic aims and objectives and choice of play The dramatic aim of our piece was to create a diverse and entertaining piece of theatre, which would not only inform the audience of the context, purpose and techniques of the performance, but also help them understand the political message behind it and make them leave in a thought provoking way, having learned something about human nature and it's effects on war and conflict. We decided to adopt Brechtian techniques as this was the practitioner we studied at A Level, and this would aid our knowledge and understanding of naturalistic theatrical techniques, making the performance interesting for both performer and audience member. The choice of play was "Oh! What a Lovely War!" by Joan Littlewood, and the section we chose was the second half of the first act; starting from the musical number "I'll make a man of you" through to the closing musical number of that act, "Goodbye-ee". While we do follow the structure of the script on the whole, we did have to adapt certain lines and cut down roles as there were many characters an not enough actors. However this proved an advantage to showcase our acting abilities and diverse multi-role play and abstract interpretation. As a group, we wanted the audience to relate to the message of war and its consequences, and as such, decided to make the piece abstract and adopt various dramatic techniques and methods such as image projection, song, soundscapes, dance, physical representation, various lighting and sound effects, and various acting skills such as posture, gesture, accents, facial expressions, levels, as well as adopting appropriate use of set, props and costume. We did not want to insult the audience by having to spell out the purpose and idea behind each scene- we wanted them to question and think about the themes and issues presented. ...read more.

through it and I didn't want to do it, but you went and made me love you so I did" , we decided that it would make more sense and irony if the recruits sang it as though the line was a direct reference to them as individuals, even though it represents the feeling of pressure on all soldiers. We then all form a line upstage and act out various actions that refer to the line being sung. So for example, on the line "On Monday a rifleman in green" the recruits pretend they are shooting a rifle and various levels to make it look visually interesting. For the closing line "but on Saturday I'm willing if you'll only take the shilling, to make a man of any one of you" this would again be direct audience address, in keeping with Brehchtian techniques, whilst marching as though to war, and point to the audience on the word "you" to make it seem more personal and relatable. We wanted this scene to be really upbeat with lots of action and movement to contrast with the more sober, solemn scenes that follow. To link this scene with the next, my character boldly strolls up the audience side steps shouting requests at them as though they are potential recruits themselves, and then continues down the middle until the scene is set for the next scene. For the next scene, "the French scene", we wanted an atmosphere of embarrassment and farce between the characters of Sir John French and General Lanrezac, as the humour comes as a result of neither person knowing the language of the other, even though French thinks he does. The hilarity arises as my representational character, Belgium aka General de Moranneville, gets dismissed by both characters for being "le petit Belgique". Gestus was used to great effect here by each character over emphasising there country's stereotype as far as accent and mannerisms were concerned. ...read more.

In addition, we taped down all the lighting cable and the fairy light wires to the floor using secure duct tape to avoid unnecessary trips and falls, and made sure we alerted the audience and cast and crew to the use of these precautions and the use of the smoke machine in case there might have been a risk of harming anyone. Furthermore, we did not use pyrotechnics to ensure that the surrounding stage curtains were not accidentally set alight, as none of our props, costume and set was fire proof. In addition, we always transported the boxes and seats during scene transition safely and carefully. We also skilfully choreographed each scene, particular those with a lot of physical movement and actor interaction, particularly the energetic musical numbers "I'll make a man of you" and "Hitchy koo", so that nobody came to any harm when performing, and by checking for any sharp edges on the stage (there were none) and on the boxes, we were able to work around it with ease and simplicity. Conclusion and evaluation On the whole, I am very contented with our final piece of devised drama. I trust that other members feel the same and are proud of our individual and personal achievements, having tackled a controversial subject matter whilst conveying it with tact and respect, but also interest. We used a variety of thematic devices and techniques to add significance and curiosity to our scenes. I consider the piece to have achieved its dramatic aims and successfully affected the audience in a positive and thought-provoking way. Having had more time, I think we could have possibly developed the themes and the relationships between characters more, as most of the scenes were quite short and representational, rather than naturalistic. However, I am wholeheartedly satisfied with the final piece of theatre and thoroughly enjoyed the entire process, from conception all the way to performance. ...read more.