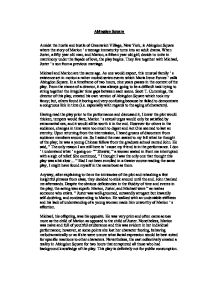 Abingdon Square Amidst the hustle and bustle of Greenwich Village, New York, is Abingdon Square where the story of Marion ' s teenage immaturity turns into an adult drama. When Juster, a fifty year old man, and Marion, a fifteen year old girl, decide to unite in matrimony under the fa�ade of love, the play begins. They live together with Michael, Juster ' s son from a previous marriage. Michael and Marion are the same age. As one would expect, this unusual family ' s existence set in motion a rather morbid series events which Maria Irene Fornes ' calls Abingdon Square. In a timeframe of two hours, nine years passes in the context of the play. From the stance of a director, it was always going to be a difficult task trying to string together the irregular time gaps between each scene. Scott T. Cummings, the director of this play, created his own version of Abingdon Square which took my fancy; but, others found it boring and very confusing because he failed to demonstrate a congruous link in time (i.e. ...read more.

Anyway, after explaining to them the intricacies of the plot and rehashing a few insightful phrases from class, they decided to stick around until the end. John thanked me afterwards. Despite the obvious deficiencies in the fluidity of time and events in the play, the acting was superb. Marion, Juster, and Michael were " as real as someone who exists. " Juster was well-groomed, outwardly arrogant but inwardly self-doubting, and condescending to Marion. He walked with an undeniable stiffness and his lack of understanding of a young woman made him unworthy of Marion ' s affection. Michael, his offspring, was his opposite. He was very prim and often came across more as the child of Marion as opposed to the child of Juster. Nonetheless, Marion was naive and full of youthful exuberance and this was evident in her individual performance; however, at some points she lost her character footing, behaving melodramatically or as if she were unsure what facial expression would be best suited for specific reactions to other characters. Nevertheless, the cast collectively created a reality in Abingdon Square for two hours that enraptured all those who had background knowledge of the play. ...read more.

Single-handedly, Curtin poured forth beats and melodies, creating a one-man-orchestra. Music is a very potent tool when used correctly. Cummings uses music to his advantage in this production. The song sung at Juster ' s birthday was very-well choreographed and received a round of applause by the audience at its end. But, the most moving song was at the end. When Michael and Marion were huddled over the enfeebled stroke-inflicted Juster, Jenny (Patricia Noonan) ethereally sung from the attic. It did not matter what the song was about; the different notes she scaled were amazing and in tune with the scenic melancholy present. In a nutshell, Cummings bit off more than he could chew. People did not appear moved by the play; as a matter of fact, they seemed indifferent to the production, which was probably due to their lack of understanding. The play was difficult to follow for the majority of the audience; therefore, I believe it would be best served in a theater of academics studying Abingdon Square. As the cellist plucked each chord, I exhumed another layer of meaning from within myself and from the play; the effect of his compositions will remain in my thought forever. ...read more.