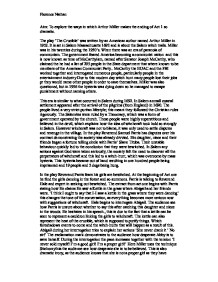 Aim: To explore the ways in which ArthurMiller makes the ending of Act 1 so dramatic.

Aim: To explore the ways in which Arthur Miller makes the ending of Act 1 so dramatic. The play 'The Crucible' was written by an American author named Arthur Miller in 1953. It is set in Salem Massachusetts 1692 and is about the Salem witch trails. Miller was in his twenties during the 1950's. When there was an era of paranoia of communism. The government feared America becoming a communist nation and this is now known as time of McCarthyism, named after Senator Joseph McCarthy, who claimed the he had a list of 205 people in the State department that where known to be members of the American Communist Party.. McCarthy the HUAC and the FBI worked together and interrogated numerous people, particularly people in the entertainment industry Due to this modern day witch hunt many people lost their jobs pr they would name other people in order to save themselves. Miller was also questioned, but in 1956 the hysteria was dying down so he managed to escape punishment without naming others. This era is similar to what occurred in Salem during 1692. In Salem a small coastal settlement appeared after the arrival of the pilgrims (from England) in 1690. The people lived a very strict puritan lifestyle; this meant they followed the Christian rules rigorously. The Salemites were ruled by a Theocracy, which was a form of government operated by the church. ...read more.

There is also repetition of the word devil 'have you enlisted these children to the devil?' Tituba claims 'I don't truck with no devil' this represents the evil in witchcraft and highlights the seriousness of the situation to the audience, especially for Tituba who is now being accused with doing evil and as being under the devils influence. However this is ironic as the audience see how she is not being controlled by the devil but by Abigail, suggesting again that Abigail is very manipulative and clever 'She sends her spirit on me in the church, she makes me laugh at prayer!' She also accuses Tituba of making her drink blood every night. This is also ironic as it is Abigail who is manipulating Tituba. and perhaps the audience may see playing the role as she manipulates Abigail twisting the situation so things become worse for Tituba but better for herself. Abigail chooses Tituba as her scapegoat because she has a low status, as a slave and that no one will listen to her as she tries to defend herself. Hale and Parris begin to interrogate Tituba more intensely and Tituba tries to defend herself but she is powerless, she is a black servant in the household, someone who has no voice.' I have no power on this child sir!' Hale and Parris don't listen to her again reinforcing to the audience of Tituba's low status. ...read more.

'I want the light off God, I want the sweet love of Jesus' the repetition of 'I' informs the audience that she is self-obsessed. And this is ominous. This outburst is caused because Abigail can see that Tituba is not only in the clear but she can also gain power from blaming others. Abigail wants to be seen, as an instrument of God but the audience knows this is ironic as Abigail is only jealous of the attention that Tituba receives. Suddenly Betty awakes and start chanting like Abigail as if she is cleansed of her sins. Parris says a prayer but Betty is unaffected this time, which demonstrates to the audience that she was never bewitched but to the other characters it is a demonstration of how Betty is cleansed of the Devils spirit. 'BETTY is rising from the bed, a fever in her eyes' this creates a dramatic impact on the audience where the tension hits a climax. This signals the beginning of the hysteria. It also foreshadows the dramatic things to. Abigail begins to take pleasure in making accusations 'It is rising to a great glee' Putnam says 'The Marshall. I'll call the Marshall' and this prepares the audience for the next Act. The repetition of Devil informs the audience that the tension is climatic, increased by the Stichomythia. The curtain falls as the girls are still chanting names. This makes the audience wonder how many more people are going to be named. The end also leaves the audience in shock and suspense but prepares them for the hysteria about to sweep through Salem Florence Nathan ...read more.