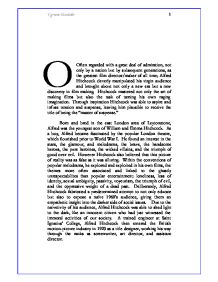 O Often regarded with a great deal of admiration, not only by a nation but by subsequent generations, as the greatest film director/maker of all time; Alfred Hitchcock cleverly manipulated his virgin audience and brought about not only a new era but a new discovery in film making. Hitchcock mastered not only the art of making films but also the task of taming his own raging imagination. Through inspiration Hitchcock was able to aspire and infuse tension and suspense, leaving him plausible to receive the title of being the "master of suspense." Born and bred in the east London area of Leytonstone, Alfred was the youngest son of William and Emma Hitchcock. As a boy, Alfred became fascinated by the popular London theatre, which flourished prior to World War I. He found an interest in the stars, the glamour, and melodrama, the brave, the handsome heroes, the pure heroines, the wicked villains, and the triumph of good over evil. However Hitchcock also believed that this picture of reality was as false as it was alluring. Within the conventions of popular melodrama, he explored and exploited in his own films, the themes more often associated and linked to the ghastly unrespectabilites than popular entertainment: loneliness, loss of identity, s****l ambiguity, passivity, voyeurism, the triumph of evil, and the oppressive weight of a dead past. Deliberately, Alfred Hitchcock fabricated a predetermined attempt to not only educate but also to expose a na�ve 1960's audience, giving them an empathetic insight into the darker side of social issues. Due to the naivetivity of his audience, Alfred Hitchcock was able to shed light to the dark, like an innocent citizen who had just witnessed the immoral activities of our society. A trained engineer at Saint Ignatius' College, Alfred Hitchcock then entered the British motion-picture industry in 1920 as a title designer, working his way through the ranks as screenwriter, art director, and assistant director. ...read more.

After washing his bloodstained hands he returned to Marion's room to retrieve clothing. After placing her body into her car, he drove the car to a secluded, swampy area where he got out and pushed the car into the bog, where it began to sink. We were left to see a dark, brooding figure standing sentry over the muddy burial until the concern Norman had on his face had changed to a smirk. In this scene it bares many resemblances to Shakespeare's Macbeth, as with Macbeth once he had committed a murder he too washed his "bloodstained" hands. Disturbed by the disappearance of her sister, Lila Marion's sister went to seek her sister's lover; Sam. While she was there she met the acquaintance of a private detective hired by Marion's boss. They were all trying to find Marion, however Arbogast the detective was also interested in finding the forty thousands dollars Marion stole. Whilst searching through potential motels Marion could have suspended at, he stumbled upon the seemingly ordinary name of the Bates Motel. Venturing alone to the motel Arbogast met Norman and began to question him, unhappy with Norman's answers he reports back to Lila and tells her that he has a hunch about the mother and would like to question her. He slowly made his way up the secluded wooden stairs, in search of discovering the truth, nonetheless Arbogast discovered the truth, and maybe not way he had hoped. However it ended in Arbogast being stabbed numerous amount of times by a yet again a shadowy figure, causing him to fall plunging down the staircase. Despite Lila being in the dark about both her sister and the detective, she tried to find refuge in the sheriff. Knowing that Norman's mother had been buried for past ten years, he was reluctant to believe that she was still in the house. Being disbelieving to what Lila and Sam were suggesting to him, they decided to do some detective work of their own, they went to the motel and rented a cabin. ...read more.

With a shadow cast behind him, which carried detail and meaning, the presence of evil was impression upon us as an audience. Utilising the audience throughout the film, Hitchcock used music and sound to do so, working alongside with the composer Bernard Herman, Psycho had its main theme music. Certain elements that we as an audience disregard, were exaggerated and concentrated in the film. Right down to the noise pollution of the traffic was examined and thought about. Hitchcock used music in Psycho to build up suspense and tension, he was dogmatic about the dramatic functions of sounds and music, and often interwove his suggestions into the screenplay. Encompassing high-pitched strings and keeping a constant tempo, the music was as menacing as it was alluring. Hitchcock used this reoccurring music throughout the film to grasp the audience entire attention. Dealing with the issue of a psychopath is one hard enough for us to bear as the audience, however it was most probably even more difficult for the victim. The themes of matricide, unmarried s*x, theft and the Oedipus complex would throw any 50's and 60's audience off and Hitchcock knew it. By exploiting these in his film, he was not only able to entertain his audience, but also educate them. The title itself gave his audience some kind of insight into the film before it had even began, using the title to sum up the character of Norman Bates, the audience experienced something fresh, something never been tapped into before, something infused with tension, and the title itself achieved this. Dealing with issues that weren't an ideal dinner table subject, Hitchcock managed to capture not only the topic, but also managed to do so whilst creating tension and suspense, and because of this I do believe that Hitchcock should receive a well deserved title and his film the reputation of being the greatest suspense fuelled film ever made. By Tyrone Sinclair 4 1 Tyrone Sinclair ...read more.