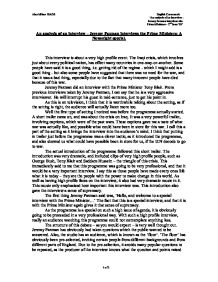 An analysis of an interview - Jeremy Paxman interviews the Prime Ministers: A Newsnight special.

An analysis of an interview - Jeremy Paxman interviews the Prime Ministers: A Newsnight special. This interview is about a very high profile event. The Iraqi crisis, which involves just about every political nation, has effect many countries in one-way-or-another. Some people have said it is a good thing, i.e. getting rid of the regime - which I might add is a good thing - but also some people have suggested that there was no need for the war, and that it was a bad thing, especially due to the fact that many innocent people have died because of this war. Jeremy Paxman did an interview with the Prime Minister Tony Blair. From previous interviews taken by Jeremy Paxman, I can say that he is a very aggressive interviewer. He will interrupt his guest in mid-sentence, just to get his point in. As this is on television, I think that it is worthwhile talking about the setting, as if the setting is right, the audience will actually listen more too. Well the first type of setting I noticed was before the programme actually started. A short trailer came on, and was about the crisis on Iraq. It was a very powerful trailer, involving captions, which were of the past wars. ...read more.

Due to the pre-selection, it avoids many popular questions to be repeated, as the producer of the interview knows what the question and points raised are going to be. If the questions were repeated again and again, the debate would become boring, and wouldn't run as smoothly as it should. The fact that 'the floor' is made up of people from different backgrounds and from different areas of England says to the viewing audience that this agenda involves everyone in England, no matter how clever, far away from London or whatever the case may be. Paxman is a very intimidating interviewer. He has the ability to put people on the spot with his quick thinking and quick ability to twist what the answers of a question may be on the interviewee. Also he is able to put people under pressure very easily, making them play into ones hand. Due to Jeremy Paxman being like this, the debate is very vigorous and passionate. This then makes the actual debate a more true case, as there is less time for the interviewee to think up ways of spinning the questions. This is exactly what the audience will want to see, and also adds a little entertainment to this serious matter, as a debate with so much venom is very interesting to watch. ...read more.

Behind Blair were a black background, and then a light on him. This made him stand out a lot; maybe it was there to give him more of a magnitude, especially when answering questions, or making a point. In the background behind Paxman was the famous bridge in Newcastle. This could be saying to the audience that Blair has bothered to come all the way up to Newcastle to talk about this matter, as every ones view counts. Also it must mean that that it is of the utmost importance. Also the camera angles were used to emphasise certain points. The broadcasters will always be looking to put the camera on the important part of the moment, or on who is speaking - possibly going for a close up with that person. You will notice that when Blair made a response, the camera would be on him alone. This is because the audience want to know answers, and if it is just on him on the screen, the audience can concentrate on what he has to say a lot more easily. Media has many ways to make people stand out, to show certain perspectives of a topic or how they want information about a topic to be portrayed. Most of them can be seen in this interview. Alan Milner 10ADS English Coursework 'An analysis of an interview - Jeremy Paxman interviews the Prime Ministers - 2nd June '03' 1 of 3 ...read more.