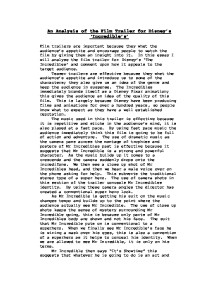 An Analysis of the Film Trailer for Disney's 'Incredible's'

An Analysis of the Film Trailer for Disney's 'Incredible's' Film trailers are important because they whet the audience's appetite and encourage people to watch the film by giving them an insight into it. In this essay I will analyse the film trailer for Disney's 'The Incredibles' and comment upon how it appeals to the target audience. Teaser trailers are effective because they whet the audience's appetite and introduce us to some of the characters; they also give us an idea of the genre and keep the audience in suspense. The Incredibles immediately brands itself as a Disney Pixar animation; this gives the audience an idea of the quality of this film. This is largely because Disney have been producing films and animations for over a hundred years, so people know what to expect as they have a well established reputation. ...read more.

This is also a convention of a superhero, that they also have a normal life besides there superhero lifestyle. While Mr Incredible is trying to squeeze his belt on it is ironic that his wife is asking him to come to dinner, there is also humour when he replies "maybe just a salad". This will appeal to the older audience as they can relate to this. Mr incredible eventually gets his belt on and the buckle then bursts, it then flies around the room and smashes the light. There is then a back out and the logo is shown this is so it is remembered. I think the trailer is very affective and appeal to the target audience because it has adult humour and child humour in it. I also think if someone saw this trailer it would encourage them to go and watch it. ...read more.