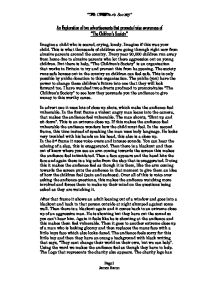 An Exploration of two advertisements that promote/raise awareness of &quot;The Children's Society&quot;

An Exploration of two advertisements that promote/raise awareness of "The Children's Society" Imagine a child who is scared, crying, lonely. Imagine if this was your child. This is what thousands of children are going through right now from abusive parents around the country. Every year 90,000 children run away from home due to abusive parents who let there aggression out on young children. But there is help, "The Children's Society" is an organisation that works in Britain to try and prevent this from happening. The society runs safe houses out in the country so children can feel safe. This is only possible by public donation to this organisation. The public (you) have the power to change these children's future into one that they will look forward too. I have watched two adverts produced to promote/raise "The Children's Society" to see how they persuade you the audience to give money to this worthy cause. In advert one it uses lots of close up shots, which make the audience feel vulnerable. In the first frame a violent angry man leans into the camera, that makes the audience feel vulnerable. The man shouts, "Shut up and sit down". This is an extreme close up. ...read more.

Using the word we makes the audience feel as though they have to help. The Logo that represents the charity also appears. The charity logo has what looks like their matchstick children coloured in red, blue and yellow. These colours are what we class as primary colours and we generally associate these colours with children. It's like ABC, when we think of this we think of young children so the same applies really to these basic colours that young children know. Advert two throughout has a popular Christmas soundtrack playing over the top, which is, "War is over" by John Lennon. In the lyrics it says, "What have you done", this makes the audience think why this girl in the advert deserves any of this. In the first frame a caption at the bottom of the screen appears and says that 90,000 children run away each year. While a girl is walking in a busy place. In the second frame a red double decker drives along side her, which we generally associate with our capital London. They have put her in London because she's a small child all on her own and its such a big city for a little girl to be in. ...read more.

Both of these adverts have one thing in common they try to persuade/convince the audience at home to give money to their organisation "The Children's Society", which can only help these poor children with donations from people like yourself. But both of the adverts are in away different in how they get the message across. I think that advert 2 is more effective because everybody feels sorry for the 10-year-old girl. The clever aspect of this advert is as she walks down the street it shows what children can be exposed too and what their organisation is trying to prevent, for example when that man leered at her. Both adverts are very moving and powerful in how they are presented to the audience. Parents sitting watching the adverts will not want their children to ever experience what the girl or boy experienced from the first and second advert. They generally feel that they have to give some money. When the audience gives money they feel as though they have done something to help these children, especially if they have donated at a time like Christmas when people like to give, and people get satisfaction out of giving. "The Children's Society" Page1 James Baron ...read more.