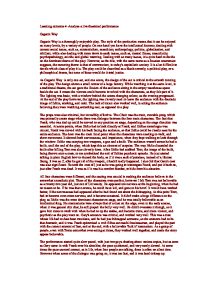 Learning outcome 4 -Analyse a live theatrical performance Gagarin Way Gagarin Way is a thoroughly enjoyable play. The style of the production means that it can be enjoyed on many levels, by a variety of people. On one hand you have the intellectual humour, dealing with current social issues, such as, existentialism, anarchism, anthropology, politics, globalisation, and nihilism, while also dealing with more down to earth issues, such as, mental illness, masculinity, psychopathology, suicide and global warming. Dealing with so many issues, it is quite hard to decide on the dominant theme of the play. However, as the title, with the same name as a Russian cosmonaut suggests, the recurring theme is that of communism, in today's capitalistic society. It is also difficult to decide which class of play it is. The play could be described as a black comedy, a political play, or a philosophical drama, but none of these would do it total justice. As Gagarin Way is only one set, and one scene, the design of the set is critical to the smooth running of the play. ...read more.

It would have worked better, if the nervousness had appeared after he had found out about the kidnapping. At this point Tom, had to become even more nervous, and it became unnatural. It didn't make a huge difference to the play, as Eddie was the more dominant character on stage, and he was totally believable as an intellectual thug. His mannerisms were always that of a man on the edge, even in the early scenes, when it was general chit chat, he still played the bully very well. He didn't overstate it though, so it gave him more to work with when he had to up the stakes, and become more, and more violent, and psychotic as the play went on. Gary's entrance was critical, and worked very well. This was a man whose life had to date been mundane, and he had just kidnapped someone, so the entrance had to be that dramatic, and it was. Frank epitomised a mid fifties successful businessman, and played the part with the correct amount of fear, and at the end, with a believable 'f**k it' mannerism. ...read more.

This was done cleverly to make intellectual sense of the play. Gary showed the most amount of emotion, and change of emotion throughout. Frank, and Tom were there by chance, and went through a range of emotions obvious to there positions. Eddie never really changed on an emotional level, and even through the killings, remained relatively calm. However for Gary, this was a critical moment in his life. This was when everything he believed in would be shown to the world. When things started to go wrong, you could see through the dialect, and emotion played by the actor, that this was a man on the edge. I became empathetic, and sympathetic to the character. In the final scenes, when Eddie began to stand, and appear normal, it was the image of Gary, a huge, and intimidating man, sitting crestfallen at the demise of his one defining moment in life, that moved me the most. Overall, this was a fantastic, and moving play. Using very little in the way of props, set, sound, and lighting, we were treated to an exhilarating, shocking, funny, and surprising feast of theatre. ...read more.