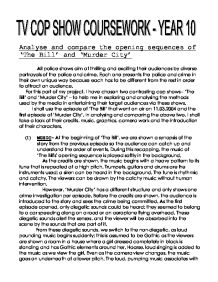 Analyse and compare the opening sequences of 'The Bill' and 'Murder City'.

Analyse and compare the opening sequences of 'The Bill' and 'Murder City' All police shows aim at thrilling and exciting their audiences by diverse portrayals of the police and crime. Each one presents the police and crime in their own unique way because each has to be different from the rest in order to attract an audience. For this part of my project, I have chosen two contrasting cop shows - 'The Bill' and 'Murder City' - to help me in exploring and analysing the methods used by the media in entertaining their target audiences via these shows. I shall use the episode of 'The Bill' that went on air on 11.03.2004 and the first episode of 'Murder City'. In analysing and comparing the above two, I shall take a look at their credits, music, graphics, camera work and the introduction of their characters. (1) MUSIC- At the beginning of 'The Bill', we are shown a synopsis of the story from the previous episode so the audience can catch up and understand the order of events. During this recapping, the music of 'The Bill's' opening sequence is played softly in the background. As the credits are shown, the music begins with a heavy pattern to its tune that is repeated at a high pitch. Trumpets, guitars and drums are the instruments used; a siren can be heard in the background. The tune is rhythmic and catchy. The viewers can be drawn by the catchy music without human intervention. However, 'Murder City' has a different structure and only shows one crime investigation per episode. Before the credits are shown, the audience is introduced to the story and sees the crime being committed. As the first episode opened, only diegetic sounds could be heard; they seemed to belong to a car speeding along on a road or an aeroplane flying overhead. These diegetic sounds alert the senses, and the viewer will be absorbed into the scene by the sounds that are part of it. ...read more.

The audience reacts vicariously to what it sees in the characters of 'The Bill' because the people are more ordinary and more like them. On the other hand, the audience is bound to be animated by the storyline of 'Murder City' and wish to have a job as is shown in the serial. They will want to look fashionable and classy and be appreciated for doing absolute hard work and being dedicated to their jobs. Hence, the different characters of the different programmes are basically instigating different emotions in their target audiences. While 'The Bill' tries to make its viewers feel at home with its characters, 'Murder City' picks up on the aspirations and imaginations of an equivalent audience. (3) CAMERA WORK/SPECIAL EFFECTS (SFX) - Apart from the camera work observed in the opening sequence of 'The Bill', we see close ups of the characters that picks out their anticipation and emotions. The opening sequence of 'The Bill' uses Montage editing; it is a visual collage that puts together very small clips to have a different effect on the overall editing. This results in a colourful and bold end product that creates an atmosphere. The camera work of 'Murder City' is much more detailed because the opening sequence consists of the first part of the story. The very first shot is a long shot; the camera gives us a panoramic view of a region of London. An aerial shot that gives us a leisurely pan over the treetops; it is a warm and pleasant view of a sunny afternoon. Then a quick zoom takes place that shows us into Grace's room - a possible helicopter or crane shot. This immediate switch will make the audience understand that they have been shown into a region of importance. As we zoom into Grace's room, there is soft focus on her face compared to the dark surroundings. This is an indication that the audience's focus should be more on her room than on her at that moment. ...read more.

On the other hand, this man earns an enormous amount of money from insurance, through the death of his brother and the destruction of his important business documents. The third episode of my show involves Esha getting suspended from the force for a few days for arresting a man without enough evidence. However, she is back in the fourth episode which involves the continuation of the above case. Esha works immensely hard on the mentioned case as well as on a number of drug cases; this leads to her special promotion. In the fifth episode of "Death in Veil" I shall again introduce the middle class of society, showing a drastic crime among ordinary, simple human beings. There will be a man who wishes to read a particular book about which he asks his friend, who wishes to murder him. This friend recommends to the man a particular library to borrow the book from, but before that, he borrows it himself and coats every alternate page in the book with cyanide. He does this because, from his observation of his friend, he unearths the distinguishable trait of his to lick his index finger before turning the page of a book. This is what leads to the death of the victim. I plan to make this episode of my show, be handled mostly by Tara as it is one of the final cases of her examination for the detective agency she wishes to join. This case helps her to pass the exam and she leaves the police force. In conclusion, I consider that my main aim in the production of this cop show will be to keep the audience intrigued so that once they watch the beginning episode of a crime, they feel the need to watch its ending episode. And then, they deem a sense of curiosity to watch the next crime and so on. I desire my audience to be a permanent one, so that they follow all of the crimes throughout the series. ...read more.