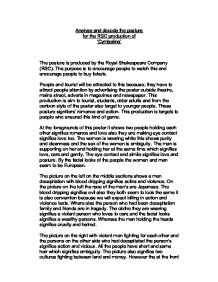 Analyse and decode the posture for the RSC production of 'Cymbeline'.

Analyse and decode the posture for the RSC production of 'Cymbeline' The posture is produced by the Royal Shakespeare Company (RSC). The purpose is to encourage people to watch this and encourage people to buy tickets. People and tourist will be attracted to this because; they have to attract people attention by advertising the poster outside theatre, mains street, adverts in magazines and newspaper. This production is aim to tourist, students, older adults and from the cartoon style of the poster also target to younger people. These posture signifiers' romance and action. This production is targets to people who ensured this kind of genre. At the foregrounds of this poster it shows two people holding each other signifies romance and love also they are making eye contact signifies love too. ...read more.

On the picture on the left the race of the men's are Japanese. The blood dripping signifies evil also they both seem to look the same it is also convention because we will expect killing in action and violence texts. Where else the person who had been decapitation family and friends are in tragedy. The clothe they are wearing signifies a violent person who loves to care and the facial looks signifies a wealthy persons. Whereas the man holding the heads signifies cruelty and hatred. The picture on the right with violent men fighting for each other and the persons on the other side who had decapitated the person's signifies action and vicious. ...read more.

wanted the audience to come and watch this play so this creates tension towards the audience. It also shows a man on the top looks as if tough. His finger pointing could also signify that he is ordering someone to do something and the clothier's signifies could be a man from the play. The clear sky with the sun a t the corner this could signifiers the Japanese flag. This poster also could be against r****m because the Europeans are draw to look nice and the Japanese draw to look horrifying and evil. The two people at the bottom making love enlarge this because these are the main character in the play. The Japanese people are drawn this way because to catch audience attention or to producer of this poster set it at like that to r****t. Abdul Muhith 10MK ...read more.