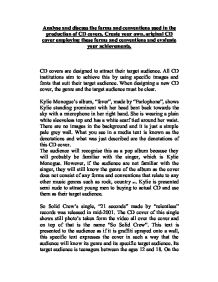 Analyse and discuss the forms and conventions used in the production of CD covers. Create your own, original CD cover employing these forms and conventions and evaluate your achievements. CD covers are designed to attract their target audience. All CD institutions aim to achieve this by using specific images and fonts that suit their target audience. When designing a new CD cover, the genre and the target audience must be clear. Kylie Monogue's album, "fever", made by "Parlophone", shows Kylie standing prominent with her head bent back towards the sky with a microphone in her right hand. She is wearing a plain white sleeveless top and has a white scarf tied around her waist. There are no images in the background and it is just a simple pale grey wall. What you see in a media text is known as the denotations and what was just described are the denotations of this CD cover. ...read more.

Its target audience is teenagers between the ages 12 and 18. On the CD cover there is also a badge in the bottom right hand side that says "parental advisory, explicit lyrics". This sign tells the audience that the music on the CD will consist of some lyrics that are not suitable for young teenagers, however the target audience is teenagers between the ages 12 and 18. This shows how the CD institution has used this logo very carefully in such a way that it attracts more teenagers towards buying the CD. It is obvious that this is a very dominant CD cover. The CD cover that has been created is based on "horror themes". The CD consists of 12 tracks which have been taken from 12 successful horror films. On the front cover, the name "HORROR THEMES" is presented in a creepy font which is apparently dripping with blood, this gives a b****y and intimidating effect to the cover and informs the audience that the CD will consist of something to do with terror and horror. ...read more.

The back of the created CD cover also consists of distinctive forms and conventions. It carries the names of the 12 tracks written in a thriller font which again, attracts the audience to the horror genre. However, the back is slightly similar to the front as it also carries the images of the skeletons, but this time it is largely transparent over the text in order to see the thunder and lightening. The forms and conventions on this CD cover are very distinct and that is why it has achieved a good result. The importance of forms and conventions are what helped to achieve a positive result from the audience. However, all CD covers consist of unique ideas about their ideology and genre. As we have seen in this essay, we know that Kylie Monogue's CD cover consist of forms and conventions that relate to her target audience which is young men and teenagers. As an audience, we know what we like in specific genres and that is why music institutions come up with different ideas for covers to suit everyone. ...read more.