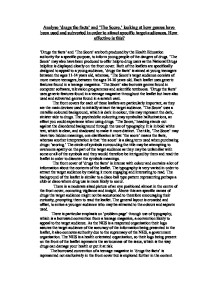 Analyse 'drugs the facts' and 'The Score,' looking at how genres have been used and subverted in order to attract specific target audiences. How effective is this?

Analyse 'drugs the facts' and 'The Score,' looking at how genres have been used and subverted in order to attract specific target audiences. How effective is this? 'Drugs the facts' and 'The Score' are both produced by the Health Education authority for a specific purpose, to inform young people of the dangers of drugs. 'The Score' may also have been produced to offer help to drug users as the National Drugs helpline is displayed clearly on the front cover. Both of the leaflets are specifically designed to appeal to a young audience, 'drugs the facts' is aimed at young teenagers between the ages 11-14 years old, whereas, 'The Score's target audience consists of more mature teenagers, between the ages 14-16 years old. Each leaflet uses generic features found in a teenage magazine. 'The Score' also borrows genres found in computer software, television programmes and scientific textbooks. 'Drugs the facts' uses generic features found in a teenage magazine throughout the leaflet but have also used and subverted genres found in a scratch card. The front covers for each of these leaflets are particularly important, as they are the main devices used to initially attract the target audience. 'The Score' uses a metallic coloured background, which is dark in colour, this may represent the dark, sinister side to drugs. The psychedelic colouring may symbolise hallucinations, an effect you could experience when using drugs. ...read more.

So overall the content page uses a range of generic conventions and subverts them in order to present unfamiliar information in a more familiar and yet dynamic way. The presentation of the target audience in 'drugs the facts' and 'The Score' can be very stereotypical. This is particularly present in 'The Score's feature, 'Dilemma.' The target audience is perceived to be 'typical teenagers,' parties, drugs, peer pressure and a great fascination with the opposite s*x are mentioned throughout the photo story. Stereotyping of the target audience is especially noticeable in picture 6. Three girls of the target audience's age are positioned around a table eating fast food, something that is strongly associated with teenagers of this age. Whilst a boy approaches the table asking one of them whether she is attending a party that night, which is also rather cliched. However there are some elements of realism, as a fair amount of teenagers do attend parties and are associated with drugs, peer pressure and do hold an interest in the opposite s*x. Making this photo story effective at attracting the target audience through their interests. The target audience is able to relate to the 'models' used in the photo story. As they are all portrayed to be of the target audience's age, (14-16) yet are from various ethnic origins. This has been specifically done so that it appeals to a broader audience. ...read more.

The stereotyped view of them is not entirely accurate and may offend the target audience rather than allowing them to relate to it. Photo stories are less frequently used in teenage magazines and more in younger ones, so this borrowed convention may strike the audience as immature and old-fashioned. It is too clich� and predictable to hold the target audiences interest, however it would be more effective for a younger audience. On the other hand 'drugs the facts' has successfully used and subverted the teenage magazine convention through the use of a quiz, 'Can you stand your ground?' The institution has adequately disguised their moral agenda amongst regular questions to make it more appealing. There are boxes to make your answers in making the target audience feel more personally involved and perhaps even making it fun to read. However I think that 'drugs the facts' was unsuccessful in using the generic features found in a teenage magazine on the front cover. It appears too cluttered and therefore inaccessible. The various fonts and colours used just distract the target audience from the issue being put across. In conclusion I think that both drugs leaflets are to an extent effective at using and subverting genres in order to attract a specific target audience. However I feel that 'The Score' was the most successful at attracting a specific target audience through its use of several borrowed generic features found in teenage magazines, the Internet, scientific text books, and various others. ...read more.