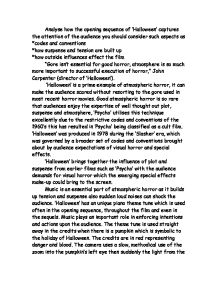 Analyse how the opening sequence of 'Halloween' captures the attention of the audience.

Analyse how the opening sequence of 'Halloween' captures the attention of the audience you should consider such aspects as *codes and conventions *how suspense and tension are built up *how outside influences effect the film "Gore isn't essential for good horror, atmosphere is so much more important to successful execution of horror," John Carpenter (director of 'Halloween'). 'Halloween' is a prime example of atmospheric horror, it can make the audience scared without resorting to the gore used in most recent horror movies. Good atmospheric horror is so rare that audiences enjoy the expertise of well thought out plot, suspense and atmosphere, 'Psycho' utilises this technique excellently due to the restrictive codes and conventions of the 1960's this has resulted in 'Psycho' being classified as a cult film. ...read more.

'Halloween' has an unique piano theme tune which is used often in the opening sequence, throughout the film and even in the sequels. Music plays an important role in enforcing intentions and actions upon the audience. The theme tune is used straight away in the credits when there is a pumpkin which is symbolic to the holiday of Halloween. The credits are in red representing danger and blood. The camera uses a slow, methodical use of the zoom into the pumpkin's left eye then suddenly the light from the pumpkin goes out almost like it was killed. Therefore at the very beginning of 'Halloween' already the audience has a feeling of eeriness though they haven't seen any action or gore. ...read more.

As the killer is walking up the stairs there is a low angle subjective shot and a clock chiming symbolises time running out for the victim. The audience hears a humming from Michael's sister symbolising innocence, she is naked and a female also showing innocence, vulnerability and weakness. The ending of the sequence builds to a climax which is when Michael's father finds him with a knife the shot type changes from the subjective view for a first time to add shock to the fact the killer is a young boy. 'Halloween' although an old film and no graphic violence seen is still an extremely effective film. This is due to the atmosphere created with suspense and tension by John Carpenter. It attracts the audience's attention therefore creating a excellent film which influenced great modern films like 'Scream' and 'Friday the 13th'. ...read more.