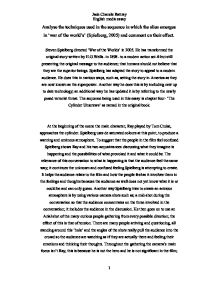 Analyse the techniques used in the sequence in which the alien emerges in 'war of the world's' (Spielberg, 2005) and comment on their effect.

Analyse the techniques used in the sequence in which the alien emerges in 'war of the world's' (Spielberg, 2005) and comment on their effect. Steven Spielberg directed 'War of the Worlds' in 2005. He has transformed the original story written by H.G.Wells- in 1898- to a modern action sci-fi but still presenting the original message to the audience; that humans should not believe that they are the superior beings. Spielberg has adapted the story to appeal to a modern audience. He does this in various ways, such as, setting the story in America as they are now known as the superpower. Another way he does this is by including new up to date technology; an additional way he has updated it is by referring to the newly posed terrorist threat. The sequence being used in this essay is chapter four- 'The Cylinder Unscrews' as named in the original book. At the beginning of the scene the main character, Ray played by Tom Cruise, approaches the cylinder. Spielberg uses de saturated colours at this point, to produce a warning and ominous atmosphere. To suggest that the people in the film feel confused Spielberg shows Ray and his two acquaintances discussing what they imagine is happening and the possibilities of what provoked it and what it could be. The relevance of this conversation to what is happening is that the audience feel the same way; it continues the unknown and confused feeling Spielberg is attempting to create. ...read more.

The falling of the spire emphasises the deterioration of the faith that existed in the hearts of many when this ordeal first began. At this point Ray and the other actors are fleeing the scene but they stop, being naturally curious they wait for whatever is below to emerge so they can be introduced and investigated. The audience's view is obstructed at this point to create tension and introduce the following part of the scene; the part where the alien emerges. The shot that is used to show the ground collapsing is a high-angled shot, used to make the people around look small and helpless and the hole seem large and powerful to introduce the alien. Smoke and fire emerges from the pit suggesting that the 'thing' below is destructive and alive. The alien then throws a car out of the pit in a way that could be described as spitting it out; the shot used is a long shot. The fact that the alien can just throw a heavy car and a modern object out in the manner that it does shows that it is very strong and our technology is inferior to it and wouldn't pose a threat to it. After the alien has disposed of the car it begins to emerge. The first part the audience sees in the arm/leg of the 'thing' that is incredibly long and strong. The camera shot used as the leg jumps out of the hole is a long shot. ...read more.

destroying the buildings; another way he makes it seem unavoidable is by showing it so large compared to the town and displaying its image as reflections in all glass surfaces. Ray/Cruise's reaction is one of fear. Other things the alien also destroys consist of cars buildings and other things such as trees etc. The destruction is displayed using a selection of shots, ones that consist of high angled, low angled, close ups and mid shots. The effect of these shots is again to help the audience see the destruction from all the views and involve them in every possible way. The symbolic significance of the people turning into ashes and buildings being destroyed can be seen as a connection to God, ash as in funerals (ashes to ashes, dust to dust...). The colours used in the end of this scene are saturated colours and unsaturated. The things that appear onscreen saturated consist of the fire made from the surrounding rubble and debris. These colours are used here to emphasise the destruction and demolition. The audience after this sequence feel involved and attached, they want to watch on to see what will happen next. They can expect that in the rest of the film they will see more destruction, more aliens and a lot more chaos. Spielberg uses this sequence to prepare the audience for the following by giving them a basic introduction to the nature of the film, the action and destruction/devastation that is the basic outline of the film along with the aliens' destiny on earth. Jade Chanele Rattray English media essay 1 ...read more.