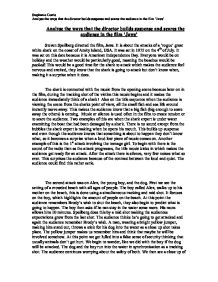 Analyse the ways that the director builds suspense and scares the audience in the film 'Jaws' Steven Speilberg directed the film, Jaws. It is about the attacks of a 'rogue' great white shark on the coast of Amity Island, USA. It was set in 1975 on the 4th of July. It was set on this date because it is American Independence Day. Everyone would be on holiday and the weather would be particularly good, meaning the beaches would be packed! This would be a good time for the shark to attack which makes the audience feel nervous and excited, they know that the shark is going to attack but don't know when, making it a surprise when it does. The shark is connected with the music from the opening scene because later on in the film, during the tracking shot of the victim this music begins and it makes the audience immediately think of a shark! Also on the title sequence when the audience is viewing the scene from the sharks point of view, all the small fish and sea life around instantly move away. This makes the audience know that a big fish (big enough to scare away the others) is coming. Music or silence is used often in the film to create tension or to scare the audience. ...read more.

therefore we connect more with Brody and his reactions. A mid shot then shows a sunburnt man blocking his view as he talks to Brody. We feel sorry for Brody at this point because of the man and start getting annoyed with the man. A woman screams in the water as a point of view shot and the audience gets ready for the shock of an attack. Although we relax again after we find out its not an attack. A tracking shot shows lots of boys run into the water splashing each other this builds up the audience's fear of an attack. The camera view changes to a close up then a mid shot and them back to a close up as a little boy (Brody's son) sings and the man calls for his dog repeatedly. The audience go back to their first expectations regarding the dog and suspect they have come true. Fear and suspense become increased. A tracking and low angle shot of the legs in the water scare the audience reminding them of the first attack and another might occur any second. A long shot shows the attack of Alex in the water confirming the audiences predictions of an attack that day. The audience experiences the same perspective as those on the beach, in particular Brody. ...read more.

When Brody's son is involved we focus on Brody and his son and their reactions. The last scenes are highlighted through the size of the boat or the equipment on board, which highlights the lack of space on board, people might get hurt or go into the water. Chief Brody is the main character, the shark expert, Hooper, is helping Brody with his search for the great white shark. Quint is the owner of the boat, he does not get on particularly well with either Hooper or Brody. Quint appears mad, enraged and determined, so much so he blows his own engine and the boat slowly starts to sink. We expect Hooper and Quint to die, we hope Brody will stereotypically survive as the hero. At the end we find out hopes were right, Brody survives and surprisingly Hooper. My personal view of the scariest point in the film is when Hooper is out in the boat with Brody, Hooper goes diving and finds a boat that obviously has been attacked by a shark. The point, which makes me scared and shocked, is when he swims up to a window and a bitten off head pops out. I personally quite like this film and I think Speilberg has done well directing it. Stephanie Corris Analyse the ways that the director builds suspense and scares the audience in the film 'Jaws' ...read more.