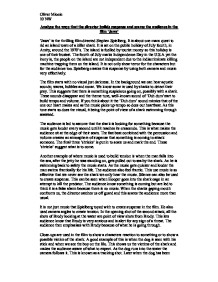 Analyse the ways that the director builds suspense and scares the audience in the film 'Jaws' 'Jaws' is the thrilling film directed Stephen Spielberg. It is about one mans quest to rid an island town of a killer shark. It is set on the public holiday of July fourth, in Amity, around the 1970's. The island is fuelled by tourist money so this holiday is one of their busiest. The fourth of July marks Independence Day in the U.S.A yet the irony is, the people on the island are not independent due to the indiscriminate killing machine trapping them on the island. It is not only shear terror for the characters but for the audience too. Spielberg creates this suspense by using both camera and music very effectively. The film starts with no visual just darkness. In the background we can hear aquatic sounds; waves, bubbles and sonar. We know sonar is used by sharks to detect their prey. This suggests that there is something suspicious going on, possibly with a shark. These sounds disappear and the theme tune, well-known sound of 'Duh dum'start to build tempo and volume. If you think about it the 'Duh dum' sound mimics that of the one our heart makes and as the music picks up-tempo so does our heartbeat. ...read more.

We see the object, the lady and a lot of scenery. This builds up suspense because the viewers are led to believe the object is a shark but it is a man with a black swimming cap. The long shot also shows how far away from the water Brody is. If an attack were to happen he would not be able to assist. The director also places obstacles in front of the camera to create tension and suspense in the film. An example of this is when the director places a man in front of the camera at one point to hinder our view. The character and the audience try emphatically to look over the mans shoulder. This creates frustration in Brody and the audience. All of the previous shots were used to build up the possibility of a possible attack. It is only when we see the legs of the children from the shark's point of view that we know an attack is going to happen. When we see the attack in the distance through Brody's eyes we feel shock due to the gruesome sight of spurting blood. When Brody realises what happens the camera does a tracking zoom. This angle makes the background look like it is approaching us and that the foreground is retreating. ...read more.

The audience know it is a bad idea to go into the shark's territory and want to scream out to warn the character. When Hooper enters the water the audience is on total alert and scan every inch of the screen, like air traffic controllers looking for a lost plane, for a possible threat. As Hooper swims up to the boat a substantious hole can be seen in the hull. Hooper extracts a tooth the size of his hand. It is at this point that we realise the scale of the shark's size. Hooper lingers about for a few seconds before deciding to look into the hole. The viewers are now trying not to look away because we expect the monstrous killer to come charging at the character. The silence of the water reassures us that no shark is coming. When we see a decapitated head slowly sinking, our hearts beat like an African drum. The characters reaction is almost paused because for a split second he does not do anything. Then suddenly the shock sinks in. We can see his reaction when his eyes widen and he screams. He then urgently starts kicking his legs to get out of the water. In his dash he drops the sharks tooth but saves his life. It is this tension the director exploits to the full, which stirs the audience up in a pot of horror. ?? ?? ?? ?? Oliver Miocic 10 NW ...read more.