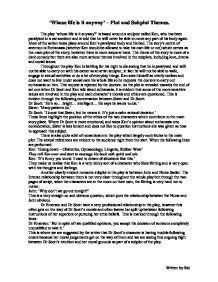 Analysing Plot and Subplot of 'whose life is it anyway?'

'Whose life is it anyway' - Plot and Subplot Themes. The play 'whose life is it anyway?' is based around a sculptor called Ken, who has been paralysed in a car accident and is told that he will never be able to move any part of his body again. Most of the action takes place around Ken's paralyzed body and his bed. The story's centre of attention is Euthanasia (whether Ken should be allowed to take his own life or not) which serves as the main plot of the story; however there is more issues at hand. The theme of the story is more of a dark comedy but there are also more serious themes involved in the subplots, including love, drama and social issues. ...read more.

This is evident through the following conversation between Sister and Dr Scott: Dr Scott: 'He's so... bright... intelligent... He says he wants to die.' Sister: 'Many patients do.' Dr Scott: 'I know that Sister, but he means it. It's just a calm rational decision.' These lines highlight the position of the ethics of the two characters which contribute to the main story place. Where Dr Scott is more emotional, and takes Ken's opinion about euthanasia into consideration, Sister is less lenient and does not like to question instructions she was given as how to approach this subject. There is also quite a bit of romanticism in the play which largely contributes to the main plot. ...read more.

This is a very straight on and obvious question, which puts the relationship between the Nurse and John obvious. Dr Emerson and Dr Scott have a very professional relationship in the play, however this often gets on the way of Dr Scott's morals and often leaves her split up between following instructions of her superiors or pursuing her ethic beliefs. This is marked through the following lines: Dr Emerson: 'But in spite of two qualified opinions, you accept the decision of someone completely unqualified to take it.' This is where we are suggested by the writer that Dr Scott's character is having trouble following orders because her moral judgements get on the way of them and we are seeing this ongoing fight between Dr Scott's intuition and her moral grounds as part of a subplot of the play. ?? ?? ?? ?? Written by Rid ...read more.