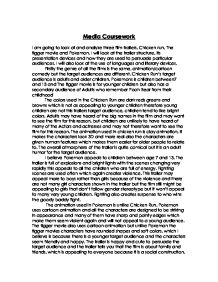 Media Coursework I am going to look at and analyze three film trailers, Chicken run, The tigger movie and Pokemon. I will look at the trailer structure, its presentation devices and how they are used to persuade particular audiences. I will also look at the use of languages and literary devices. Firstly the genre of all the films is the same, animation/cartoon comedy but the target audiences are different. Chicken Run's target audience is adults and older children, Pokemons is children between7 and 13 and The tigger movie is for younger children but also has a secondary audience of Adults who remember Pooh Bear from their childhood The colors used In the Chicken Run are dark reds greens and browns which is not as appealing to younger children therefore young children are not this trailers target audience, children tend to like bright colors. Adults may have heard of the big names in the film and may want to see the film for this reason, but children are unlikely to have heard of many of the Actors and actresses and may not therefore want to see the film for this reason. The animation used in chicken run is clay animation, it makes the characters look 3D and more real also the characters are given human features which makes them easier for older people to relate to. ...read more.

The children see one of the characters crying and will want to know why, they will want to know who wins the goody baddy fight that is shown. In addition to this there is clues that the film is quite violent because of all the fighting scenes and the explosions and flashes of light. The tigger movie trailer is also very effective in persuading its target audience, the characters are always smiling which lets you know that the film is very happy and nice. All the backgrounds are soft reds oranges and yellows they are very warm colors which makes everyone feel nice and happy. The clips of the film flow together nicely and are mainly slow moving apart from one clip at the beginning which sort of flashes on and off, this will get the audiences attention and make them interested in watching the rest of the trailer. The sound effects in the chicken run are the least effective I think. The background music is army like and not very memorable but it does set the scene. The voice over tells us the story line, backs up the visual effects, fills in the gaps where music might have been and gives us information about the makers and the big names in the film. The tigger movie uses two different types of music and they go very well with the visual effects, at first the music is very happy and up ...read more.

People that will be taking the young children (the target audience) to see the film will be certain that the film will be well made. The chicken run identifies a gender divide both ways, we see rocky, a male chicken coming to rescue all the female chickens from the farmers. We also see the opposite of the men being more capable than women stereotype because we see Mrs. Tweedy shouting at Mr. tweedy and bossing him around we also see him obeying her. The Pokemon movie identifies a gender bias. All of the Pokemon creatures are male apart from 2 or 3 and all the Pokemon trainer we see are boys apart from one girl that is dressed like a boy. This trailer was obviously aimed at boys more than girls which could work against the makers of the film because girls wont want to see the film and therefore they have shortened their market. The tigger movie identifies the importance of family and friendship, which is very persuasive to its target audience, because for young children family and friendship are the biggest things in their lives. Also the secondary audience of people that remember the characters from when they were young will remember that tigger didn't have a family with a mum or brothers and sisters and will want to see the tigger family that is talked about in the trailer. ...read more.