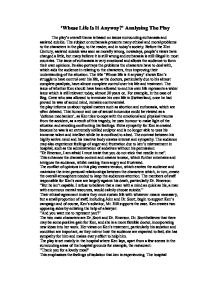 'Whose Life Is It Anyway?' Analysing The Play The play's overall theme is based on issues surrounding euthanasia and assisted suicide. The subject or euthanasia presents many ethical and moral problems to the characters in the play, to the reader, and in today's society. Before the 21st Century, assisted suicide was seen as morally wrong, nowadays, people's views have changed a little, but many believe it is still wrong and euthanasia is still illegal in most countries. The issue of euthanasia is very emotional and allows the audience to form their own opinions. Its also portrays the problems the characters have to deal with, which aids the audience in relating to the characters, thus improving their understanding of the situation. The title 'Whose life is it anyway' shows Ken's struggle to have control over his life, as the doctors, particularly due to his almost complete paralysis, have almost complete control over his life and treatment. The issue of whether Ken should have been allowed to end his own life represents a wider issue which is still relevant today, almost 30 years on. ...read more.

It is also not mentally stimulating enough for Ken, as his intelligence is not being used to its full potential. During Act One, the audience is introduced to most of the characters, the setting and Ken's unfortunate situation. The 'subplot' involving Kay Sadler and John also becomes apparent, and continues to develop throughout the play. The audience begin to form their own opinions on the issue, and the statement: "I've decided not to stay alive" Is very powerful. It increases the tension within the hospital and gives the audience 'food for thought' as they experience the emotions brought on by such a cutting statement. In Act One, Ken's feelings are at their lowest point He feels lonely and depressed and this negativity eventually peaks when he makes the decision to end his life. Tension is a crucial part of the atmospheric progression in the play. The part where Ken receives 'Valium' against his will is a major point of tension: "I specifically refused permission for you to stick that needle in me and you didn't listen." Both this incident and the meeting with Mrs Boyle create tension. ...read more.

The play is extremely thought provoking and it insists the audience challenge and discuss the issues raised about euthanasia. In conclusion, I think that Brian Clark has used sympathy and tension to intrigue and entertain the audience, as well as using a controversial issue. This maintains the attention of the audience and the constant progression of the plot, particularly the 'sub-plots', which add a little light relief from the main dramatic content and bring in an emotional side to the play, thus helping the audience to relate to the points being brought about. The use of humour and s****l innuendo's is also notable, this lightens the tone and also helps the audience to build attachment to Ken as he makes them laugh and feel comfortable. The issues surrounding euthanasia are still sensitive and controversial, and even more so in the 1970's, at the time of the play's release. The issue is highly opinionated, and the fact that Ken fights for his own right to die questions morals and ethics, both from the audience, and society as a whole. In my opinion, Ken should have had the right to die, and others, of sound mind, should be allowed to do so if it is seen to be beneficial. ...read more.