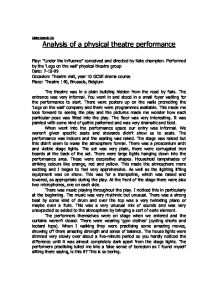 Analysis of a physical theatre performance - Under the Influence

Claire Garrett 10c Analysis of a physical theatre performance Play: "Under the influence" conceived and directed by Kate champion. Performed by the 'Legs on the wall' physical theatre group Date: 7-10-99 Occasion: Theatre visit, year 10 GCSE drama course Place: Theatre 140, Brussels, Belgium The theatre was in a plain building hidden from the road by flats. The entrance was very informal. You went in and stood in a small foyer waiting for the performance to start. There were posters up on the walls promoting the 'Legs on the wall' company and there were programmes available. This made me look forward to seeing the play and the pictures made me wonder how each particular pose was fitted into the play. The floor was very interesting. It was painted with some kind of gothic patterned and was very dramatic and bold. When went into the performance space our entry was informal. We weren't given specific seats and stewards didn't show us to seats. The performance was indoors and the seating was raked. The stage was raised but this didn't seem to make the atmosphere formal. There was a proscenium arch and visible stage lights. The set was very plain, there were corrugated iron boards at the back of the set. There were large lights hanging down into the performance area. These were decorative shapes. Household lampshades of striking colours like orange, red and yellow. This made the atmosphere more exciting and I began to feel very apprehensive. As well as the lighting lifting equipment was on show. This was for a trampoline, which was raised and lowered, as appropriate during the play. ...read more.

Their actions and loving glances made them look like a very happy, in love, kind of couple. The movements we all very vivid and quick. Once they had got out the plates then they sat down to eat, using the trampoline as a table. This was the end of this scene. The theme changed completely and focused on a different plot. Ten minutes or so later we went back to having Lucia in the spotlight addressing the audience. She was saying that she was bored of the same old crockery, and the same old routine everyday. Her body language suggested that she was depressed as she was standing in a very slumped over manner. They then went into the same routine that they had done earlier. The man was still making very vivid movements and had a big grin on his face. Lucia on the other hand moved much less. She moved very slowly and acted like she knew what was coming next by getting ready in advance, for example if the man was going to hand her some crockery she would put out her hand ready to receive it. She also used her body language to tell us that she was bored by hesitating sometimes. She wasn't so eager to stare longingly into her husband's eyes. This showed how the relationship had gone sour with the passing of time. Lucia had obviously expected something more, to progress but the man was obviously a very simple man and was pleased with the way things were. He could tell that Lucia was very bored with the relationship and tried some very funny, idiotic things to try and get her to laugh but this just seemed to make her even more angry. ...read more.

I thought that the Cinderella story line was used to make you think of how you were when you were younger and how you expected all men to be like prince charming but when you finally find what you think you have been looking for it doesn't turn out like you had once expected. This was shown by her changing words. She seemed to be doing this subconsciously as every time she had a pause she corrected herself. I thought that this was a very clever way to get across their message. She created dialectic very well with this little 'speech' and it was very hard hitting and came across to the audience very clearly. It was also hugely funny to watch as her jerking movements and her spoonerisms and swapped words were very funny too. I really enjoyed going to see this play. It showed a whole new side of drama that I had never come across before. I found many of the conventions used intriguing and useful in getting across a point. I thought that the piece was very well done and was a very good length. It kept a good tempo throughout and it really held my attention. I found many of the movements and conventions very inspirational and will certainly be trying to include this side of drama from now on. I think that it is particularly useful for hard hitting issues such as s*x, r****m etc. I found that you can use your body as a tool and it isn't only useful in drama when you want to portray a fight scene etc. I think that it was definitely worth while going to see this play as it has really opened my mind to new interpretations of performing. ...read more.