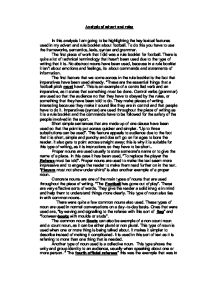 Analysis of advert and rules

Analysis of advert and rules In this analysis I am going to be highlighting the key lexical features used in my advert and rule booklet about football. To do this you have to use the frameworks, semantics, lexis, syntax and grammar. The first piece of work that I did was a rule booklet for football. There is quite a lot of technical terminology that hasn't been used due to the type of writing that it is. No abstract nouns have been used, because in a rule booklet it isn't about emotions and feelings, its about commands and statements of information. The first feature that we come across in the rule booklet is the fact that imperatives have been used already. "These are the essential things that a football pitch must have". This is an example of a controlled verb and an imperative, as it states that something must be done. Control verbs (grammar) are used so that the audience no that they have to obeyed by the rules, or something that they have been told to do. They make pieces of writing interesting because they make it sound like they are in control and that people have to do it. ...read more.

It makes it simpler to describe instead of making it complicated. It is used in this sort of text as it is referring to more than one thing that is needed. Another type of noun used is a collective noun. This type shows the unity and group identity to an audience, usually when speaking about one or more person. " The fourth official referees" this was the example that was in the rules about football. Here the audience would know that there is a group involved as it plural. The types of adverbs that have been included are time adverbs. "45 minutes and "15 minutes" are two examples used. These give direct information and detail about how long something will take place for. It is essential in this piece of writing as it is one of the main rules of how long a football match can go on for. It will add depth for the audience and give them an idea to what is happening. The indefinite article "A" is used a lot; it is used to refer to something inparticular, "A player must not wear anything that is dangerous", in this case it is stating something about a player. ...read more.

This sort of speech set a standard and helps the audience to gauge it against another familiar noun. This quote is also a rhetorical question, as the audience won't be able to answer the question until they have tried it out. This makes the audience feel involved in the text, and might get them to buy the product. The definite article has been used "The". It has been used to emphasise what is so special about it. If you had the sentence without "The" then it would be quite plain and simple, but using it, it refers to something inparticular making it more interesting. s****l connotation has been used, and has been expressed by how big the font is. "How big are your b***s" has two meanings e.g. how big are your footballs, or the s****l way. s****l connotations are used for humour and to keep the audience entertained and to not make the passage boring. It is suitable for this sort of writing as I am really on about football, and this is what the reader would think. Throughout this analysis I have tried to pick out the main points in my two pieces of work and explain them the best I could by saying how the feature appeals to the audience, why it is suitable for the purpose of the text and how does it endure menaing. ...read more.