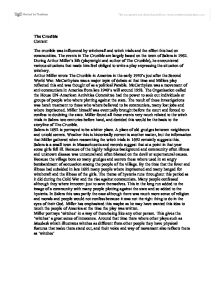 Analysis of Context in 'The Crucible'

The Crucible Context The crucible was influenced by witchcraft and witch trials and the effect this had on communities. The events in The Crucible are largely based on the town of Salem in 1962. During Arthur Miller's life (playwright and author of The Crucible), he encountered various situations that made him feel obliged to write a play expressing the situation of witchery. Arthur Miller wrote The Crucible in America in the early 1950's just after the Second World War. McCarthyism was a major topic of debate at that time and Millers play reflected this and was thought of as a political Parable. McCarthyism was a movement of anti communism in America from late 1940's will around 1958. The Organisation called the House UN-American Activities Committee had the power to seek out individuals or groups of people who where plotting against the state. The result of these investigations was harsh treatment to those who where believed to be communists, many lost jobs and where imprisoned. Miller himself was eventually brought before the court and forced to confess to doubting the state. ...read more.

Many people confessed although they where innocent just to save themselves. This in the long run added to the image of a community with many people plotting against the state and so added to the hysteria. In Salem this was partly the case although there was much more sense of religion and morals and people would not confess because it was not the right thing to do in the eyes of their God. Miller has emphasized this maybe as he may have wanted this idea to touch the people of America at the time the play was written. Miller portrays 'witches' in a way of them being like any other person. This gives the 'witches' a great sense of innocence. Around that time there where other plays such as Macbeth which illustrates witches as different from other people they have physical features that make them stand out, and their voice and way of movement also reflects them as 'witches' The historical accuracy of the play is on the whole pretty accurate. ...read more.

Hysteria is another theme running throughout the crucible. This applies to today and peoples ways of dealing with a situation or accusation. If many people cannot cope or are scared by a situation this can result to false confessions or something that could be regretted in the future. The crucible is portrayed with mostly historical accuracy onstage, within the language, costume, characterisation, plot and subplot, although it could be conveyed in a much more modernised way, through different uses of costume and different acting techniques. If I where to re create The Crucible as my own play I would make it very minimalist, with the setting plain and simple, but the acting very thorough and real. Although this would mean the play was not as realistic visually, the acting and dialogue would be noticed much more and some of the ideas and themes would hopefully hit the audience with greater impact. Another approach could be to stick rigidly to what is written and research into the context of the play. The costume and setting would relate to what would have been at the time of the trial, this would add to the genre of realism. ...read more.