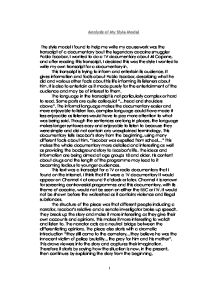 Analysis of My Style Model

Analysis of My Style Model The style model I found to help me write my coursework was the transcript of a documentary bout the legendary cocaine smuggler Pablo Escobar. I wanted to do a TV documentary about Al Capone, and after reading this transcript, I decided this was the style I wanted to write my own transcript for a documentary in. This transcript is trying to inform and entertain its audience. It gives information and facts about Pablo Escobar, describing what he did and various other facts about his life informing its listeners about him. It is also to entertain as it made purely for the entertainment of the audience and may be of interest to them. The language in the transcript is not particularly complex or hard to read. Some parts are quite colloquial "...head and shoulders above". The informal language makes the documentary easier and more enjoyable to listen too, complex language could have made it less enjoyable as listeners would have to pay more attention to what was being said. Though the sentences are long in places, the language makes longer syntaxes easy and enjoyable to listen to because they were simple and did not contain any unexplained terminology. This documentary tells Escobar's story from the beginning, using many different facts about him, "Escobar was expelled from school..." ...read more.

Concrete nouns also provide a better image of the incidents described and once again prove the detailed authentic information being told. There are adjectives used in certain parts to create the imagery the narrator desires and emphasise some points "huge laboratory...dense jungle...numerous trips". Pronouns like "I" emphasise the personal elements of the accounts from the speakers who had an opinion on the subject and were personally involved. The neutral narrator does not use many pronouns, and the only one he does use is 'he' when talking about Escobar. The text has possibly been modified so that the correct tone is used to keep the text interesting and exciting. The script is spoken so most is natural speech from different people, however the narrators speech has been manipulated and written to emphasise the drama within the story "In Columbia, children don't brag about the car their parents drive but the number of bodyguards". This gives an example of the dangerous situation in Columbia and emphasises how different life is to American or British life. The syntax of the script contains mainly complex sentences that are broken up by commas. The commas act as a 'breathing space' as the transcript is spoken then recorded. As it is spoken, the speech also contains short, compound sentences. The narrator's sentences contain the most of these and they are used to build up tension in the speech. ...read more.

The overall effect of all these features is a smooth running, interesting and riveting documentary. All the speakers are authentic and their pronunciations and colloquialisms are not changed in any way. The narrator explains the story in between pieces of speech. The narrator acts as a bridge and this makes sure the audience keeps up with the story. The array of different personalities of varying importance to the story keeps the audience interested and is always throwing a new angle on the whole story. The brother of Pablo Escobar has a differentiating opinion from the widow of Colonel Ramirez, killed by Escobar. The text achieves exactly what it sets out to achieve- it produces an interesting, accurate and entertaining piece about Pablo Escobar. The layout helps in that it breaks up the dialogue between the different people so that the audience does not become overwhelmed or saturated with one person's opinion. The narrator is essential in acting as a neutral bridge between the audience and the speakers. By starting with a dramatic description of what has become of Escobar, the audience is immediately drawn into the story and wants to continue listening to see what takes place. Also, the beginning shows that some people regard the infamous criminal as a hero, this also encourages the viewer to continue watching to see what it is Escobar has done to achieve this status. Word Count: 1462 ?? ?? ?? ?? 1 1 ...read more.