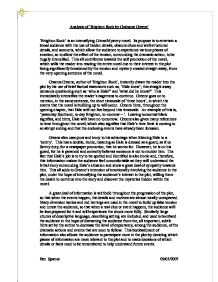 Analysis of 'Brighton Rock by Grahame Greene' 'Brighton Rock' is an intensifying Crime/Mystery novel. Its purpose is to entertain a broad audience with the use of hidden details, obscure clues and well structured details, and accounts, which allow the audience to experience various phases of emotion, so to allow the effect of the tension, surrounding the dramatic action, to be hugely intensified. This all contributes towards the self promotion of the novel, which wills the reader into reading the entire novel due to their interest in the plot being significantly broadened by the tension and mystery created straight away, from the very opening sentence of the novel. Graeme Greene, author of 'Brighton Rock', instantly draws the reader into the plot by his use of brief factual statements such as, 'Hale knew'; this straight away demands questioning such as 'who is Hale?' and 'what did he know?' This immediately intensifies the reader's eagerness to continue. Greene goes on to mention, in the same sentence, the short timescale of 'three hours', in which the events that the novel is building up to will occur. Greene hints, throughout the opening chapter, that Hale will not live beyond this timescale. An example of this is, 'yesterday Southend, to-day Brighton, to-morrow-'. Leaving tomorrow blank signifies, and hints, Hale will have no tomorrow. ...read more.

It is also ironic that Hale's job is to be dressed up as someone he is not, because it appears that Hale is living more that one life and in one of those lives he is known as 'Fred'. It is clear, on many occasions with his lifestyles, not least this one as he goes to great lengths to deny and forget this past life. Hale appears to be, or has been a shady character once and appears to be very unhappy and lonely as a result. This is described as his, 'badge of loneliness'. There are multiple clues throughout the plot that suggest that he is envious and longs to be like the others around him. They also suggest that Hale feels confused and trapped, as if he feels, he can't be the person he longs to be. Greene, however, decides to portray Hale's innocence and shows the audience his real name and feelings, so that the audience may associate with Hale and believe that they know him better than any other of the characters that appear in the novel. Greene also includes distinctive, recognition facts about Hale, such as, 'Inky fingers'; 'Bitten nails', with which he uses repetition to help the audience to associate with Hale. In addition to this Greene helps Hale's situation stand out a great deal more than that of the people around him by the deep description of the calm, pleasant, surreal settings and bliss experienced by the holiday makers contrasts Hale's personal situation. ...read more.

Once he has slipped an important fact or detail, he abruptly changes the subject of description, so to build up the level of anticipation and to control the level of tension so that he can increase it when he is ready to include another detail or to slip in a red herring, in the hope of falsely alarming the audience so that they will be caught unprepared when the real event occurs. When Greene is mentioning important details he sticks to a short, dramatic sentence structure. This helps to stun the audience and build up a great deal of tension, to which Greene controls with great effect by switching to a longer, calmer sentence structure that relaxes the audience until Greene is ready for the tension to re-emerge at a slightly higher level. To conclude, I believe Grahame Greene controls the audience's emotions very well through his novel, 'Brighton Rock'. His cool use of brief, detailed, obscure facts and dramatic, metaphorical descriptions, along with his minimalist use of characters, help the audience to identify to the plot, with ease even though very little important information is given out at one time. This has a very good combined effect as its gain is the audience eagerly anticipating the revealing of mysteries within the plot as the human mind, naturally cannot, easily, cope with an unsolved mystery. Word Count= 1,394 ?? ?? ?? ?? H/W Ben Spanos 09/05/2007 ...read more.