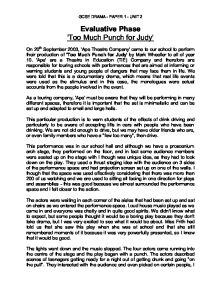 'Ape Theatre Company' came to our school to perform their production of 'Too Much Punch for Judy' by Mark Wheeller to all of year 10.

GCSE DRAMA - PAPER 1 - UNIT 2 Evaluative Phase 'Too Much Punch for Judy' On 20th September 2003, 'Ape Theatre Company' came to our school to perform their production of 'Too Much Punch for Judy' by Mark Wheeller to all of year 10. 'Ape' are a Theatre in Education (TiE) Company and therefore are responsible for touring schools with performances that are aimed at informing or warning students and young people of dangers that may face them in life. We were told that this is a documentary drama, which means that real life events were used as the stimulus and in this case, the monologues were actual accounts from the people involved in the event. As a touring company, 'Ape' must be aware that they will be performing in many different spaces, therefore it is important that the set is minimalistic and can be set up and adapted to small and large halls. This particular production is to warn students of the effects of drink driving and particularly to be aware of accepting lifts in cars with people who have been drinking. We are not old enough to drive, but we may have older friends who are, or even family members who have a "few too many", then drive. ...read more.

We learnt from the monologues that were presented that Jane had already been done for drink driving and that Judy felt like she was loved less by her parents. Therefore, the decision that was made was to change their lives forever. The keys were thrown between them and the action froze as the decision was made - Judy would drive Jane's car because she didn't feel too drunk. The freeze was a good idea because the silent pause symbolised that moment where you get the chance to think and make a decision. Music was used brilliantly to enhance the crash scene, The Carpenters song "We've only just begun..." played softly and as they girls sat on the chairs, representing the car. The 2 male actors stepped in to the scene wearing bright yellow jackets, like traffic police wear, and they held 2 metal poles and were hitting them against their hands. They put on "bully boy" voices and were mocking the girl's decision to drive home and moved closer and closer to them. I understood that the way that the space was used was very important because it built up to the moment when the crash took place. ...read more.

It was very brave of the family involved to allow their story to be used in this way - yet I understand that they know that it can help others to not make silly decisions like this. I think that it showed the realities of how making a stupid decision could break a family apart, wreck, and take lives. It is not just drink that people need to be aware of when driving, more and more people drive when stoned or having taken other drugs and this also needs to be thought of because it's just as dangerous. I thought that the non-naturalistic dramatic techniques used in this production were good because if we had watched a naturalistic performance where the stage looked like real life we wouldn't think about the issues as much as it would have been difficult to reinforce them. By being able to talk directly to the audience and use freezes the audience becomes an important part of the performance and can't help feel involved - rather than just watching and saying "oh that was sad wasn't it?" This style of performance encourages you to sit up and take notice and even take action. It was an excellent piece of theatre. ...read more.