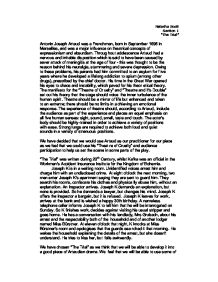 Natasha Scott Section 1 "The Trial" Antonin Joseph Artaud was a Frenchman, born in September 1896 in Marseilles, and was a major influence on theatrical concepts of expressionism and absurdism. Throughout adolescence Artaud had a nervous and irritable disposition which is said to have been caused by sever attack of meningitis at the age of four- this was thought to be the reason behind his neuralgia, stammering and severe depression. Owing to these problems, his parents had him committed to an asylum for five years where he developed a lifelong addiction to opium (among other drugs), prescribed by the chief doctor. His time in the Great War opened his eyes to chaos and instability, which paved for his theoretical theory. ...read more.

"The Trial" was written during 20th Century, whilst Kafka was an official in the Workmen's Accident Insurance Institute for the Kingdom of Bohemia. Joseph K is in a waiting room. Unidentified voices arrest him and charge him with an undisclosed crime. At eight o'clock the next morning, two men enter Joseph K's apartment saying they are sent to guard him. They search his rooms, confiscate his clothes and physically abuse him, without an explanation. An Inspector arrives. Joseph K demands an explanation, but none is provided. So he demands a lawyer, but changes his mind. Joseph K offers the Inspector a bargain, but it is refused. Joseph K leaves for work, arrives at the bank and is wished a happy 30th birthday. ...read more.

There are many different styles of performance which could all, quite legitimately, describe themselves using the term 'physical theatre', which has led to a lot of confusion as to what the definition of physical theatre actually is! These include Mime, Contemporary Dance, Clowning, Physical Comedy, Theatrical Acrobatics and sometimes Puppetry. While performances based around all of the above could equally claim to be 'physical theatre', it is often difficult to say for certain what is and what is not physical theatre. Distinctions are often made quite arbitrarily by critics and performing companies. Physical Theatre's primary focus is on the physical work of the actors, expressed through the use of their bodies. Companies like "Complicite" produce work in which language is woven into a physical journey that the audience witnesses. It is a highly visual form of theatre. ...read more.

This essay starts very confidently and shows an explicit knowledge about the work, life and times of Antonin Artaud. There is a sound appreciation of his dramatic intentions and how he revived the theatre, but there could a be clearer ...

This essay starts very confidently and shows an explicit knowledge about the work, life and times of Antonin Artaud. There is a sound appreciation of his dramatic intentions and how he revived the theatre, but there could a be clearer explanations as to why - what did he believe about conventional theatre? How does his "Theatre of Cruelty" differ? But after the relatively strong introduction the candidate makes a poor attempt at rationalising it as their chosen acting style. The candidate should be looking to spend a few more lines on why it was chosen, and rather than suggesting that it might encourage a "good" Theatre of Cruelty production, actually give a decent argument for their decision. They should also reference at least one section/scene in which they think would be a highlight due to their Artaudian interpretation - how do they aim to achieve Artaud's dramatic intentions? What are his intentions for his audience? (think his idea of reality, social façades and catharsis) This MUST be included or else the essay is relegated to a C grade for A Level.

The Level of Analysis is not very evident here. The candidate shows a fair understanding of the theories of Artaud (though a quote from Artaud himself may assist this part of their essay), although the actual analytical content is lacking. The candidate tries to apply the theories and acting models to their work but does so insufficiently because they do not target specific examples from their work to evidence the potential effectiveness for an audience. The candidate unnecessarily explains what physical theatre is, and because they do not cite this as one of their main influences in the introductory paragraph, there is no need to waste time listing the examples of physical theatre, especially things like "Clowning" as this rarely features in Artaudian work. If wishing to incorporate elements of physical theatre to compliment the Artaudian theatre, the candidate must state clearly that this is an intention and then go on to explain why., listing examples.

The Quality of Written Communication here is good. The candidate's use of grammar, punctuation and spelling has no major errors that compromise the clarity of the essay or what it tries to say. The candidate also uses a variety of Drama-specific terminology with reference to particular acting styles, allowing the examiner to see that this candidate does have a good grasp of some aspects of theatrical style, but the answer itself does not directly satisfy the question.