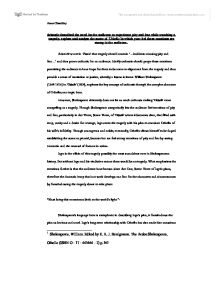 Aristotle described the need for the audience to experience pity and fear while watching a tragedy, explore and analyse the scene of Othello in which your feel these emotions are strong in the audience.

Aristotle described the need for the audience to experience pity and fear while watching a tragedy, explore and analyse the scene of 'Othello' in which your feel these emotions are strong in the audience. Aristotle wrote in 'Poetics' that tragedy should contain '...incidents arousing pity and fear...' and thus prove cathartic for an audience. Ideally catharsis should purge these emotions permitting the audience to have hope for there to be some re-alignment from the tragedy and thus provide a sense of resolution or justice, whereby a lesson is learnt. William Shakespeare (1564-1616) in 'Othello' (1604), explores the key concept of catharsis through the complex character of Othello; our tragic hero. However, Shakespeare ultimately does not let us reach catharsis making 'Othello' more compelling as a tragedy. Though Shakespeare categorically lets the audience feel emotions of pity and fear, particularly in Act Three, Scene Three, of 'Othello' where it becomes clear, that filled with envy, vanity and a desire for revenge, Iago starts the tragedy with his plan to convince Othello of his wife's infidelity. Though courageous and noble, eventually, Othello allows himself to be duped establishing the scene as pivotal, because her we feel strong emotions of pity and fear by seeing Hamartia and the reversal of fortune in action. Iago is the villain of this tragedy possibly the most scandalous ever in Shakespearean history. But without Iago and his vindictive nature there would be no tragedy. ...read more.

Furthermore his insecurities of being not so experienced with women are accurately judged by Iago triggering the audiences emotion of pity for Othello, who is remote of the situation: "In Venice they do let God see the pranks/ They dare not show their husbands..." 11 Iago, here, implies Venetian women have affairs and play tricks thus Desdemona is betraying Othello, her husband. We pity Othello as a character because he does not understand the complexities of life, since he has been shaded away from the 'real world' since a young child. He only understands the language of battle. Othello in turn puts his trust into Iago who he assumes will guide him safely but Iago cleverly manipulates this idea of society, cleverly pushing emotions of pity and fear as the audience and only the audience know who the real Iago is: "I know our county disposition well-"12 Here what Shakespeare really means for Iago to say is, "I know, but you cannot know...". The audience are aware from the very first meeting of Othello that though he his a noble man although of a lowly background, allowing the audience to consider Othello an ordinary man who feels emotions of pleasure and anger. These characteristics contribute to the audience's emotion of fear because it is for sure that Othello will make an absolute approach to the situation and a decisive action upon it: "Within these three days let me hear thee say/ That Cassio's not alive."13 Nevertheless Othello's love for Desdemona is true, so true that it ...read more.

example Cassio is well placed in and out of the scene to push our emotions further, fulfilling the traditions of a Greek tragedy, the tragedy also starts late and then accelerates until the inevitable d�nouement and anagnorisis by Othello, testing the audiences patience. Act Three, Scene Three in 'Othello' has been composed by Shakespeare to reinforce the emotions of pity and fear, by engaging us with the characters and involving us on semi-plots, thus fearing for the targets of the tragedy, Othello and Desdemona. 'Othello' could be defined as a domestic, personal tragedy, where a cycle of emotions are felt enthralling you with emotive feeling therefore affecting us much more than other tragedies. Shakespeare sensibly allows us to feel valuable emotions of pity and fear but ultimately does not reach catharsis. The pity and fear felt by the audience only give tragedy; there is no purpose to the tragedy after Othello and Desdemona die resulting without justice or resolution. Undeniably, Iago gets punished but it is very futile, there is no motivation behind Iago's evilness; just a man's personal vendetta. Therefore the destruction of a loving couple leaves the audience unhappy because by this we learn no lesson and our suspension of disbelief breaks. What could be further acknowledged is that Othello dies a murderer compared to what he might have died as if the play of 'Othello' were to stop at Act One; the transformation has finally poisoned him to the very end of the play further proving as injustice to the traditions of tragedy. ...read more.