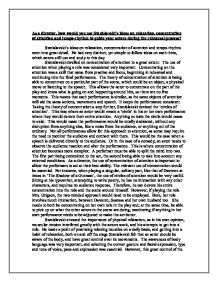 As a director, how would you use Stanislavski's ideas on relaxation, concentration of attention and tempo-rhythm to guide your actors during the rehearsal process?

Sitting at his typewriter, attempting to write poetry, he has no interaction with any other characters, and requires no audience response. Therefore, he can devote his entire concentration into the role and the scene around himself. However, if playing the role Mrs. Grigson, the two-minded approach would need to be employed. Here, her role involves much interaction, between Davoren, Seamas and her own husband too. She needs to both be concentrating on her own role in the play and, at the same time, be able to pick up on what the other actors in the scene are doing, monitoring if anything in her own performance needs to be adjusted to make the act better. Stanislavski stressed the importance of physical relaxation, as in his own opinion, muscular tension interfered greatly with the actors work, and his attempts to get into a role. He made a point of practising relaxing muscles on a daily basis, and getting into a habit of relaxation, both on and off the stage Stanislavski felt that an actor should be aware of the body, and have great control over its movements. ...read more.

He once said, 'You must get accustomed to disentangling and searching out your own rhythm from the general, organised chaos of speed and slowness going on around you on the stage.' As a director, it would be very important that each actor knows what each other is doing, how they are acting and their own rhythms. The use of contrasting rhythms would have to be employed and the inner and outer rhythms of an individual actor need to be different to create the contradiction, leading to greater tension within the role. Most importantly, as a director, I feel it is necessary, that the use of relaxation, tempo-rhythm and concentration of attention compliment each other. For instance, a relaxed actor is most suitable to be able to concentrate fully, even if it is in circles of attention or a more two-minded approach. Similarly, the relaxed actor is most able to use tempo-rhythm and control himself appropriately. Each technique, it needs to be stressed, are not independent of each other, but need to be used together to result in the best performance. ...read more.