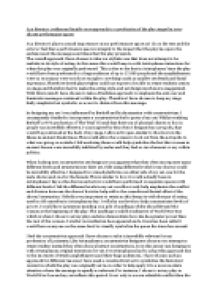 As a director, outline and justify your approach to a production of &quot;Lysistrata&quot; staged in your chosen performance space:

﻿As a director, outline and justify your approach to a production of the play staged in your chosen performance space: As a director I place as much importance on my performance space as I do on the text and the actors. I feel that a performance space is integral to the impact that the play has upon the audience and the messages and ideas that the play presents. The overall approach I have chosen to take is a stylistic one that does not attempt to be realistic in its style of acting. In this sense this would keep in with Aristophanes intentions for when this play was originally performed. This is due to the fact in Aristophanes? time the play would have been performed to a huge audience of up to 17,000 people and the amphitheatres were so vast many were not close enough to see things such as smaller set details and facial expression. Therefore Greek playwrights could not expect to be able to create realistic scenes on stage and therefore had to make the acting style and set design much more exaggerated. With this in mind I have chosen to take a Brechtian approach to emphasis the anti-war and feministic messages contained within the play. Therefore I have chosen to keep my stage fairly simplistic but symbolic, so as not to distract from this message. In designing my set I was influenced by Berkoff and his fascination with constructivism. I consequently decided to incorporate a constructivist feel to parts of my set. Whilst watching Berkoff?s 1970 production of ?The Trial? I found that their use of physical objects to box in people was incredibly effective. I was inspired by this when I designed my acropolis, that would be positioned at the back of my stage. I allowed it open, similar to the doors in the Skene in ancient Greek times. This would allow the women to look out from the acropolis to what was going on outside. ...read more.

I felt enclosing them would help symbolise the fact that women in ancient Greece were incredibly inhibited by males and they had no involvement or say within politics. When looking into constructivist set designs it was apparent that they often incorporate many different levels and structures into their set. I felt using different levels for my chorus would be incredibly effective. I designed two raised platforms on either side of my set, one for the male chorus and one for the female. This is similar to how it would actually been in Aristophanes? day as the chorus and actors would have performed on separate spaces with different levels. I felt the different levels in my set would not only help emphasise the conflict and division between the chorus? but also help add to the comedic and farcial effect of the chorus? interaction. I felt this was important to retain as this keeps in with the type of acting used in old comedies in Aristophanes day. I will also use levels to help communicate levels of power. I would have Lysistrata standing on a pile of sandbags whilst she addressed the women at the beginning of the play. The sandbags would be indicative of World War One which is when I chose to set my play and also demonstrate how she has greater power than the rest of the women. Yet after reconciliation has appeared and a truce has been called I would have everyone on the same level to visually symbolise the peace the truce has caused. I feel the constructivist approach I have chosen to take is incredibly relevant for my production of Lysistrata. Like Aristophanes, constructivist designers chose not to attempt to create reality; instead they often chose abstract constructions. So in this sense I am keeping in with Aristophanes original intentions for set. Yet Aristophanes had to adopt this approach due to the enormity of Greek amphitheatres and their huge audiences. ...read more.

I have chosen such an approach for different reasons. I have used a constructivist set to symbolise the historical context in which the play was originally set in, in order to help apply it to a more modern situation where the message is equally as relevant. For instance, I chose to set my play in World War One and my set reflects this period. It not only is a more relatable conflict than the Peloponnesian war but it was also the time when women were fighting for their political rights as the suffragettes. My set on the whole is simplistic, however there are some smaller details that I have incorporated in as my theatre is smaller and more intimate than a Greek amphitheatre. For instance, I have two small pieces of rolling set that will start on stage that will include a front door and a picket fence with bushes to represent Lysistrata?s house. In addition, I will have a Suffragettes banner hung across my acropolis which will be styled on the bank of England. The latter details I feel are important in indicating the historical period I have set the play in which will help my modern day audience relate to the themes and messages the play communicates. As I am focussing on the social and political messages contained within the play I have chosen not to distract the audience too much with the colours in my set. Berkoff often only uses one colour and its various shades in his sets and this influenced my set at lot. I felt having my set filled with dull monochromes and beiges would not only distract from the social and political message but will also help to symbolise how bleak life is when there is a war, and the devastating effects war has. Therefore in contrast to this, when Reconciliation enters she will have vivid and rich coloured flowers to protect her modesty and when she has reconciled the soldiers, bright colours will gradually be integrated into the set to indicate the achievement of Lysistrata and the celebration of peace. ...read more.