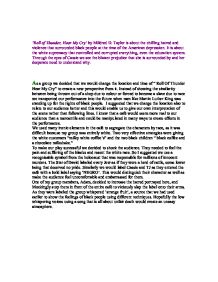 As a group we decided that we would change the location and time of &quot; Roll Of Thunder Hear My Cry&quot; to create a new perspective from it.

'Roll of Thunder, Hear My Cry' by Mildred D. Taylor is about the chilling hatred and violence that surrounded black people at the time of the American depression. It is about the white supremacy that controlled and corrupted everything, even the education system. Through the eyes of Cassie we see the blatant prejudice that she is surrounded by and her desperate need to understand why. As a group we decided that we would change the location and time of " Roll Of Thunder Hear My Cry" to create a new perspective from it. Instead of showing the similarity between being thrown out of a shop due to colour or forced to become a slave due to race we transported our performance into the future when men like Martin Luther King was standing up for the rights of black people. I suggested that we change the location also to relate to our audience better and this would enable us to give our own interpretation of the scene rather than following lines. ...read more.

The white customers make a sudden 'bang' as they stamp on the floor, bang on the desk or thrust their chairs backwards and stand enclosed around Cassie like a prison. The lights turn red at this moment. Red is often associated with fear, danger and maybe even blood so we thought it would add to the tension and suspense being created. There would be a pause for 5 seconds to allow the audience to take in what has just happened. We use choral speaking to drown out Cassie's cries as we push her towards the exit showing our strength against her. "How dare you argue with us!" "You make me sick." "You n****r!" . The second scene includes just Cassie and TJ on the street outside after being humiliated and thrown out of the caf�. Although Cassie always speaks her mind and expresses her true feelings, TJ bottles up his emotions and views. This meant that we had to find another way of letting the audience know what he was feeling. ...read more.

The only clue the audience has that everything turns out differently is the way the rest of the customers and the waitress reacts. We sit peacefully, smiling, not even acknowledging the situation, and leaving it on a cliffhanger. This ending satisfies the audience that out of the all of the horrors that happened hundreds of years ago when black men and women were treated like animals, justice is served. This is equality. The different texts that we use during our performance of " Roll Of Thunder Hear My Cry" are Speeches from Martin Luther King and similar figures, a line from " Strange Fruit", and a script we have devised our self. When performing it to the audience, we all agreed that for the play to have full impact on them, they needed to feel totally involved. Everything that we were experiencing through the characters they had to feel themselves. So they were sat in closely around us in a horseshoe, but spaced apart from one another to make them feel vulnerable when we interacted with them. ...read more.