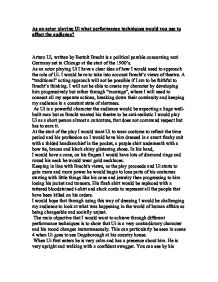 As an actor playing Ui what performance techniques would you use to affect the audience?

As an actor playing Ui what performance techniques would you use to affect the audience? Arturo Ui, written by Bertolt Brecht is a political parable concerning n**i Germany set in Chicago at the start of the 1900's. As an actor playing Ui I have a clear idea of how I would need to approach the role of Ui. I would have to take into account Brecht's views of theatre. A "traditional" acting approach will not be possible if I am to be faithful to Brecht's thinking. I will not be able to create my character by developing him progressively but rather through "montage", where I will need to connect all my separate actions, breaking down their continuity and keeping my audience in a constant state of alertness. As Ui is a powerful character the audience would be expecting a huge well-built man but as Brecht wanted his theatre to be anti-realistic I would play Ui as a short person almost a caricature, that does not command respect but has to earn it. At the start of the play I would want Ui to wear costume to reflect the time period and his profession so I would have him dressed in a smart flashy suit with a folded handkerchief in the pocket, a purple shirt underneath with a bow tie, braces and black shiny glistening shoes. ...read more.

could be shouted at the top of his voice and he could throw his head back and spread his arms out wide in a greatly over exaggerated movement. After this outburst Ui would quickly calm back down and is once more humble suggesting that he wants to help Dogsborough. "It's now or never. Let me save you" To show this Ui can sink to his knees and when he attempts to seize his hand, Dogsborough can remove his hand in slow motion saying his next lines while he quietly weeps "I'm washed up and I know it" At the end of the scene Ui once again has regained his dignity and saunters out with confidence. This would show the inconsistencies in Ui's behaviour. Brecht believed that the actor should not get emotionally involved with the character and should present it to the audience rather than represent it. A definite distance has to be created between the actor and the role. Instead of creating a rounded character, I would need to demonstrate the character. To achieve this during rehearsal I would speak in the third person rather than the first, as I would when performing. To show the audience the difference between myself and the character of Ui, I would use the cane that I walk with. ...read more.

It is not important what the scene would look like in real life as long as I am able to convey the social and "political" content to the audience. In the last scene Ui has achieved all his aspirations to take over the vegetable trade and is very jubilant. He should stroll on very slowly and deliberately, taking his time to reach the center of the stage congratulating all his bodyguards and gangsters. When he reaches the centre of his stage, he should deliver his closing speech directly to the audience starting off slowly and quietly with little movement but building up to fast loud shouting with very violent movements of the arms as Hitler would have done at this type of address. These actions should reinforce the contradiction in Ui's character. By portraying Ui as a character of conflicts, at times charming, sinister and also "comic", by exploring the possibilities for contradiction and controlled movements, by presenting the role rather than representing it, I will be trying to portray what Brecht called after Wordsworth, the "verfremdungseffekt" cultivating in the audience an objective response to the message in the play. I would hope that I would be making the audience look at things in an unexpected way while producing an enjoyable performance. ...read more.