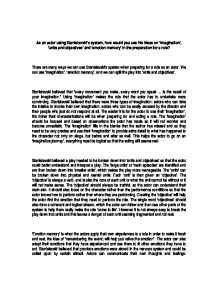 As an actor using Stanislavski's system, how would you use his ideas on 'imagination', 'units and objectives' and 'emotion mem

As an actor using Stanislavski's system, how would you use his ideas on 'imagination', 'units and objectives' and 'emotion memory' in the preparation for a role? There are many ways we can use Stanislavski's system when preparing for a role as an actor. We can use 'imagination', 'emotion memory', and we can split the play into 'units and objectives'. Stanislavski believed that "every movement you make, every word you speak ... is the result of your imagination." Using 'imagination' makes the role that the actor has to undertake more convincing. Stanislavski believed that there were three types of imagination: actors who can take the iniative to invoke their own imagination, actors who can be easily aroused by the director and then people who just do not respond at all. ...read more.

The 'units' can be broken down into physical and mental units. Each 'unit' is then given an 'objective'. The 'objective' is always a verb, and is also the core of each unit or what the unit cannot be without or it will not make sense. The 'objective' should always be truthful, so the actor can understand their main aim. It should also focus on the character rather than the performance conditions so that the actor knows how to perform rather than where they are performing. Creating the 'objective' will help the actor find the emotion that they need to perform the role. The single word 'objectives' should also form a coherent and logical stream, which the actor can follow and then use other parts of the system to help them really make the role 'come to life'. ...read more.

Therefore, in using these three parts of the system, an actor can effectively prepare for a role, in which that role looks fresh and realistic, and therefore what Stanislavski set out to achieve. Personally I think that 'emotion memory' is very effective because the actor will have had the experience of that emotion before and will be able to bring it to the surface in their acting more easily. 'Units and objectives' do not work in all plays in my opinion as some plays are very complicated and can therefore not be broken down very easily. 'Imagination' is also another very effective way for an actor to prepare for a role in my opinion because actors are able to fill in the gaps and use their own interpretations on the character they are performing as; this will make the performance seem more realistic as they actor is using a 'bit of themselves' in order to undertake the role. ...read more.

This is a very focused answer on the required three aspects of Stanislavskian theatre and the candidate's focus is unbroken throughout their answer. The response is a little systematic, and in turn can feel very detached and the fluency disrupted ...

This is a very focused answer on the required three aspects of Stanislavskian theatre and the candidate's focus is unbroken throughout their answer. The response is a little systematic, and in turn can feel very detached and the fluency disrupted by segregated paragraph topics, but this kind of essay does not require as much cross-paragraph referencing and integration as, for example, and English essay would. The candidate covers all the aspects required to appreciate Stanislavski's system and demonstrates a good knowledge of the terminology required in order to correctly address the theories he writes of.

The Level of Analysis is very good. There is an excellent explanation of three of the steps required to assume the role of a completely naturalistic actor. The descriptions are well-structured, and adhere well to what Stanislavski aimed to achieve in theatre consistently by their focus on how he wanted to create a "fresh and realistic" theatre. The candidate's commentary on emotion memory, units and objectives, and imagination all give the impression of someone who is very adept in the understanding of Stanislavskian theatre, and there is excellent evidence to suggest this candidate can write an analytical response as they begin to consider the downsides of splitting plays into sections that are treated individually rather than as one coherent unit. This is a very good way of strengthening the answer; by briefly challenging or mentioning a drawback of a theory can show that there is a good understanding not only of the theory, but also the practical elements of it.

The Quality of Written Communication (QWC) here is very good. The candidate either has excellence in clarity of written expression or has, like many candidate neglect to do and result in losing QWC marks, read and re-read their answer and corrected any spelling and grammatical errors. This is a very good use of time because we tend to make involuntary mistakes when we write, without even noticing.