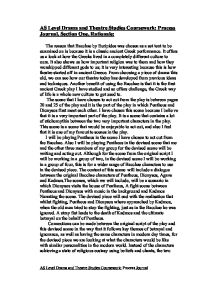 AS Level Drama and Theatre Studies Coursework: Process Journal, Section One, Rationale: The reason that Bacchae by Euripides was chosen as a set text to be examined on is because it is a classic ancient Greek performance. It offers us a look at how the Greeks lived in a completely different culture to ours. It also shows us how important religion was to them and how they worshipped different gods to us; it is very interesting because this is how theatre started off in ancient Greece. From choosing a piece of drama this old, we can see how our theatre today has developed from previous ideas and techniques. Another benefit of using the Bacchae is that it is the first ancient Greek play I have studied and so offers challenge, the Greek way of life is a whole new culture to get used to. The scene that I have chosen to act out from the play is between pages 20 and 25 of the play and it is the part of the play in which Pentheus and Dionysos first meet each other. I have chosen this scene because I believe that it is a very important part of the play. ...read more.

I took into account that Pentheus is angry and sarcastic in this scene between him and Dionysos. After thinking about this I decided to use more of an R.P accent when speaking out the script and also to use a sarcastic tone of voice in order to bring across Pentheus's anger and sarcasm. I also thought it would work well if I walked around Dionysos almost pacing and jeering at him giving him small pushes and laughing at him when he offered his side of the story defending his gods that Pentheus had no belief in. Developing the set text in way of interaction between me and another member of my drama group who was playing Dionysos was done in the way that we planned out the interaction between the two characters as they argued over Dionysos's beliefs. Physical interaction was used in a way that the body language of Dionysos showed that he was not bothered or scared by the threats of Pentheus. The body language conveyed in my role of Pentheus involved me pushing Dionysos and pacing around him whilst laughing sarcastically at him before speaking out my lines. Development of the devised scene led to a bit of a change in storyline to what was first intended. ...read more.

This gave each of us chance to develop our role as the character by studying their roles in the Bacchae and incorporating their feeling in the devised piece. Different lighting effects where used to convey different emotions in the performance and I think that this effect worked well. Improvements that could be made to the devised piece would be to make it longer so more of a development of the characters feelings, emotions, and roles can be incorporated from the Bacchae script. Overall I think that my project went well. I think that the devised performance worked better than the scripted performance and I would say that I enjoyed the devised section more, both the writing and the performing of it because it offered more freedom to have fun with the characters and try to create something that would be enjoyed by both the actors and actresses and the audience. Although the scripted piece went fairly well, I was not s pleased with the scripted piece as I was with the devised because the devised had more advanced lighting effects , more developed roles and the use of music and pre-planned fight scenes which made it generally more interesting. AS Level Drama and Theatre Studies Coursework: Process Journal ...read more.