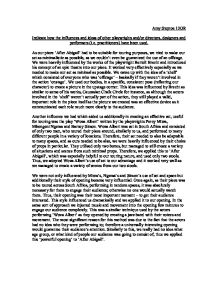 As our piece 'After Abigail' had to be suitable for touring purposes, we tried to make our set as minimalistic as possible, as we couldn't even be guaranteed the use of an offstage. We were heavily influenced by the works of the playwright Bertolt Brecht

Amy Steptoe 13GR Indicate how the influences and ideas of other playwrights and/or directors, designers and performers (i.e. practitioners) have been used. As our piece 'After Abigail' had to be suitable for touring purposes, we tried to make our set as minimalistic as possible, as we couldn't even be guaranteed the use of an offstage. We were heavily influenced by the works of the playwright Bertolt Brecht and introduced his concept of an epic theatre into our piece. It worked very effectively especially as we needed to make our set as minimal as possible. We came up with the idea of a 'shelf' which consisted of everyone who was 'offstage' - basically if they weren't involved in the action 'onstage'. We used our bodies, in a specific, consistent pose (reflecting our character) to create a picture in the upstage corner. This idea was influenced by Brecht as similar to some of his works, Caucasian Chalk Circle for instance, as although the actors involved in the 'shelf' weren't actually part of the action, they still played a valid, important role in the piece itself as the picture we created was an effective device as it communicated each role much more clearly to the audience. ...read more.

This was a similar technique used by the actors performing 'Woza Albert' as they opened by creating a jazz band with their voices and movement. The most significant reason for this method was due to the fact that the actors had no idea who they were performing to; therefore a universally interesting opening would guarantee their audience's attention. Similarly to this, we really had no idea what age group, or what kind of people our audience was going to consist of, thus we applied this 'powerful opening' to 'After Abigail'. Our set and use of space was heavily influenced by a variety of playwrights, but as was our use of a narrator. We decided to use 'Laurence' who had just died at the end of Mike Leigh's 'Abigail's Party' to help our story unfold, and to aid in filling in any gaps which may have existed. From w***y Russell's 'Blood Brothers' we adopted a very effective style, in which the narrator actually became integrated into the action of the piece. ...read more.

It resulted in the formation of our house warming scene in which, over a few hours time, guests begin to arrive and finally the whole cast is involved in the action, apart from two characters. This specific scene almost became a play within a play, as the build up of characters added great depth to the scene and a large amount of the plot was revealed. John Godber's 'Bouncers' influenced another idea we adopted to function in this scene. As mentioned before, a large amount of the plot was to be exposed to our audience during this specific scene, however it needed to take place over a realistic amount of time. Therefore, we needed to implement a method of 'squashing' time from maybe four or five hours to four or five minutes. Hence, looking at Godber's 'Bouncers' we adopted a technique (a short phrase 'Round 1' 'Round 2' 'Round 3') to represent a new hour. Consequently, a new round of drinks symbolised a new time period later during the evening. This idea, influenced by Godber, aided us to unfold more of the narrative in a shorter space of time. ...read more.