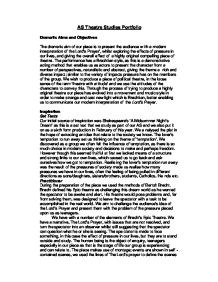 AS Theatre Studies Portfolio Dramatic Aims and Objectives The dramatic aim of our piece is to present the audience with a modern interpretation of the Lord's Prayer', whilst exploring the effects of pressure in our lives, and giving the overall effect of a highly original compelling piece of theatre. The performance has a Brechtian style, as this is a demonstrative acting method that enables us as actors to present the character from a number of perspectives, naturalistic and abstract, giving the theme a rich and diverse impact; similar to the variety of impacts pressure has on the members of the group. We wish to produce a piece of political theatre, in the loose sense of the term 'theatre with attitude' and we use the attitudes of the characters to convey this. Through the process of trying to produce a highly original theatre our piece has evolved into a movement and music style in order to make strange and cast new light which is Brechtian, better enabling us to communicate our modern interpretation of the Lord's Prayer. Inspiration Set Texts Our initial source of inspiration was Shakespeare's 'A Midsummer Night's Dream' as this is a set text that we study as part of our AS and we also put it on as a sixth form production in February of this year. We analysed the plat in the hope of extracting an idea that relate to the society we know. The lover's temptation to run away set us thinking on the theme of 'temptation'. We discovered as a group we often felt the influence of temptation, as there is so much choice in modern society and decisions to make and perhaps freedom. However though this seemed fruitful at first we lacked means of a structure and strong links to our own lives, which caused us to go back and ask ourselves how we got to temptation. ...read more.

Between each we repeated the line "Hollowed be thy name". The sacrament associated with this scene was baptism because babies are precious and baptism is about purification, something totally pure is very precious too. By coming out of character, a Brecht technique, to add our own very personal input we wish the audience to think of their own lives, as Brecht would have wanted. Following this we used the line 'forgive us our trespasses, as we forgive those who trespass against us' in relation to conflicts we have in our lives. The DV8 physical theatre influenced the idea of this scene as one of there sketches was of someone being left out and others at a party avoiding this one person we experimented with this, using hugging as our avoidance technique. We added lines from 'A Mid Summer Night's Dream' to give it another level of depth and this part worked but the movement looked too chaotic and did not portray the idea of conflict so we kept the lines but altered the situation to be a fight in the common room. This worked better aesthetically. We turned to the back of the stage at this point and played the song 'Ye Jacobites By Name' which itself is about conflict (for more information see the bibliography) and used projection again to show pictures and photographs that portrayed the message of conflict. This is quite a political scene in that it gives the audience the chance to reflect on conflict and that the world is in your hands, there is very little difference between students fighting in the common room to leaders of countries only the later have recognised power. This links to the sacrament confession through our intrinsic moral value that makes us feel fighting and killing is wrong but through the fact that we still do it we should be sorry. To show this we turn and repeat one of the 'Mid Summer Night's Dream' assume position that are symbolic of confessing in a confessional. ...read more.

It was to our advantage in this area that our choice of scenery and prop is so minimalist, but we still had to take extreme care with the benches we were using as they were old and made of wood that was starting to split. We kept ourselves out of danger by ensuring that the worst affected bench was not in the middle, the one that is used most for standing on. The curtains surrounding the stage are all fire proof and are therefore safer to work around. We ensured no material came into contact with fire or hot surfaces at any time. Backstage the balcony surrounding the stage presented a hazard for us as students on occasions as it has become cluttered. If we were attempting to find a prop or set item, we had to take extreme care when walking along the raised area as we may trip over a protruding object. Also we had to ensure fire extinguishers are in relevant places in case of fire. Conclusion and Evaluation I am pleased with the evolution of our piece from the starting point of 'A Summer Night's Dream' to our modern interpretation of the 'Lord's Prayer'. If we had more time there is lots more we would have done. We wished to use pre-filmed clips and photographs of the rehearsal process, plus there were still some scenes we had ideas for that we did not get to used such as a revamped version of the Adam and Eve scene which would have represented the line 'on earth as it is in heaven'. However we found ourselves severely limited by time and had to make sure we could perfect what we had done and no ask too much of ourselves. It has felt like a long and difficult process to reach a final piece, especially as I have worked in this way before with such high stakes, yet I am confident in what we have produced and feel able to act in it with conviction. ...read more.