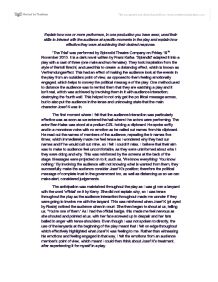 Audience Interaction. The Trial was performed by Splendid Theatre Company on Friday 19th November 2010. It is a dark novel written by Franz Kafka. Splendid adapted it into a play with a cast of three (one male and two females)

Explain how one or more performers, in one production you have seen, used their skills to interact with the audience at specific moments in the play and explain how effective they were at achieving their desired response. 'The Trial' was performed by Splendid Theatre Company on Friday 19th November 2010. It is a dark novel written by Franz Kafka. 'Splendid' adapted it into a play with a cast of three (one male and two females). They took inspiration from the style of Bertolt Brecht, and used this to create a distancing effect, which is known as Verfremdungseffect. This had an effect of making the audience look at the events in the play from an outsiders point of view, as opposed to them feeling emotionally engaged, which helps to convey the political message of the play. One method used to distance the audience was to remind them that they are watching a play and it isn't real, which was achieved by involving them in it with audience interaction; destroying the fourth wall. ...read more.

By involving the audience with not knowing what is wanted from them, they successfully make the audience consider Josef K's position; therefore the political message of complete trust in the government too, as well as distancing us so we can make alert, considered judgements. The anticipation was maintained throughout the play as I was given a lanyard with the word 'official' on it by Kerry. She did not explain why, so I was tense throughout the play as the audience interaction throughout made me wonder if they were going to involve me with the lanyard. This was reinforced when Josef K (played by Rosie) noticed the audience when in court. She then began to shout at us, telling us, 'You're one of them.' As I had the official badge, this made me feel nervous as she shouted and pointed at us, with her face screwed up in despair and her fists balled in anger with tense shoulders. Even though I was not spoken to directly, the use of the lanyards at the beginning of the play meant that I felt on edge throughout which effectively highlighted what Josef K was feeling to me. ...read more.

The use of the cue cards also made me consider how we had encouraged an action that received the character's reactions. This made the audience realise how people can encourage injustice, by making us do it for ourselves and making the point with their reactions to our interactions. They successfully improvised this, as they could not have predicted his reaction, which again destroyed any naturalistic illusion and kept us distanced, achieving 'verfremdung'. I feel that the actors were particularly good at using audience interaction as they skilfully improvised to suit people's reactions, as every audience is different. Such as with the 'whipping' participation, they adapted their response to fit in. This was what made it so effective, as he appeared uncertain, they made him feel worse when they reacted like that, opposed to him being confident, when their reaction would be different. Without this improvisation skill, I do not feel that the audience interaction would have been as effective at conveying the political message and making the audience feel apprehension similar to Josef K's, which was their desired response. ...read more.