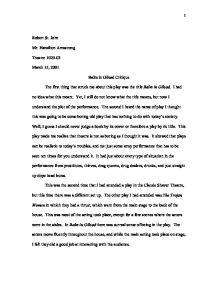 Robert St. John Mr. Hamilton Armstrong Theatre 1020-03 March 15, 2001 Balm in Gilead Critique The first thing that struck me about this play was the title Balm in Gilead. I had no idea what this meant. Yet, I still do not know what the title means, but now I understand the plot of the performance. The second I heard the name of play I thought this was going to be some boring old play that has nothing to do with today's society. Well, I guess I should never judge a book by its cover or therefore a play by its title. This play made me realize that theatre is not as boring as I thought it was. ...read more.

In Balm in Gilead there was surreal sense of being in the play. The actors move fluently throughout the house, and while the main acting took place on stage, I felt they did a good job at interacting with the audience. The cast did not just interact with the audience during the play, but also while Blake and I were seating waiting for the second act to come on. We decided to play along with the actors and they did not let up for one second. Even when we tried to stop they kept asking us for money, asking if we wanted to go in a hotel with them, and even the drag queens were hitting on us. ...read more.

The whole time the actor was speaking they would put one spotlight on the speaker, and dim the lights on the rest of the characters. This really emphasized the key points in the play. This play was originally set in the 1960's, but this performance directed by Michael Tick was set around the 1980's. So they had more issues dealing with the 80's like AIDS, the rise of heroin, and ugly clothing with bad hairstyles, this was used to show how important these problems are today. Brian Gouri (dopey), says, "The goal of the production is to get people to realize the reality of the characters' lives." It just goes to show that drug dealers, dope-heads, and prostitutes still have lives just like normal people just in different circumstances than the audience. 1 ...read more.